Political Circus: Comic takes a 'Rock' to the Tea Party 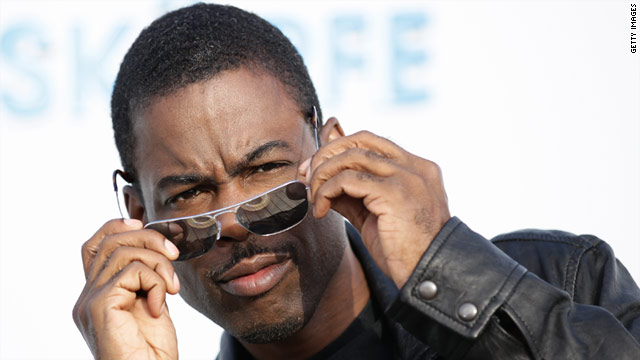 Comedian Chris Rock has taken on the Tea Party in a recent interview.
STORY HIGHLIGHTS

Funnyman Chris Rock is known for some controversial takes on politics. His latest target is the Tea Party movement. In an interview with Esquire magazine, Rock equates Tea Partiers to kids, who he says always act up the most right before they go to sleep.

"They're going crazy. They're insane," he said. "You want to get rid of them -- and the next thing you know, they're f---ing knocked out."

From top diplomat to drummer

Like a rock star, clad in a leather dress during Grammy-winning trumpeter Chris Botti's show at the Kennedy Center in Washington.

A member of the audience even whistled at her.

When Botti asked her to sit in as a drummer, she jumped at the chance.

"At the end of the song, she raised her sticks in the air as if she were Bon Jovi's drummer," Botti said.

Time: Hey, Chicago, Say Hello to Your Next F#@*ing Mayor

Slate reports that Joe the Plumber -- made famous by Sen. John McCain, the 2008 Republican presidential candidate -- is back in the news.

This time, he's getting his own online show.

No word on whether he'll tackle your home's plumbing needs.

KLEW-TV reports that former Republican Gov. Arnold Schwarzenegger has been made into a "hero sculpture" by long-time friend and artist Ralph Crawford in Lewiston, Idaho.

"The reason why we're doing this isn't because I wanted to have it in my bedroom," Schwarzenegger said. "But because someone decided to buy the house that I grew up in in Austria, in Thal, and they made that house into a museum."

What does the artist think? "I know he liked it," Crawford said. "He found a few little changes, but I figured that was going to come anyway. You know, he's got to have his personal touch."

"Bill Clinton revealed this week that he only sent two e-mails while he was president. And then he added, 'turns out those pills were just a scam." -- Jimmy Fallon

"President Obama was in San Francisco today meeting with a group of technology executives including Facebook founder Mark Zuckerberg. The goal is to find a way to create new jobs to replace jobs that had been lost as a result of everyone spending their time at work on Facebook. The president's hoping that the success of programs like Farmville, a million new imaginary jobs can be created." -- Jimmy Kimmel