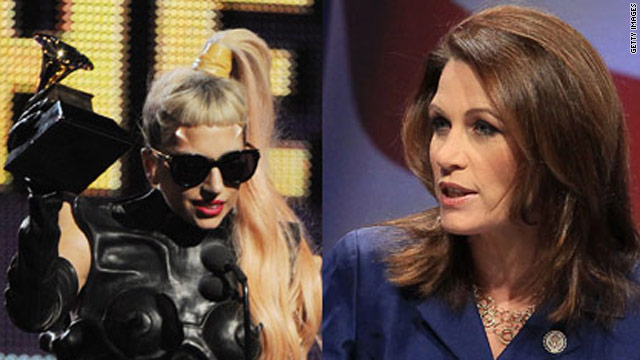 One of Gaga's "little monsters?"

Former President Bill Clinton, attending the Wired for Change conference at the Ford Foundation in New York, revealed that he barely knew about technology during his presidency.

"He began on a lighthearted note, admitting that maybe he wasn't the most credible person to weigh in on technology," Fast Company reports.

The reason? "I sent a grand total of two e-mails as president," he said, "one to our troops in the Adriatic, and one to John Glenn when he was 77 years old in outer space. I figured it was OK if Congress subpoenaed those."

"New Jersey Republican Gov. Chris Christie's first big speech in Washington was titled, "It's Time to Do the Big Things," and, sure enough, it didn't take him long to make a fat joke."
-- The Washington Post's Dana Milbank

"There, I just said it! I'm still standing here, and I did not vaporize."
-- New Jersey Gov. Chris Christie, talking about reforming Social Security

"Today marks the 40th anniversary of the war on drugs. ... You know what that means? That makes Charlie Sheen our most decorated veteran."
-- Jay Leno

"Last night on Fox News, Donald Trump says he's not a fan of George W. Bush because he 'gave up Obama.' When he heard this, Bush was like, 'Oh my gosh, I'm Obama's dad?' "
-- Jimmy Fallon

@Roarty_NJ [Rick] Santorum isn't the only one with a Google problem. Especially if you like Jon Huntsman and have arachnophobia

CNN Senior White House Correspondent Ed Henry reports that if President Obama had a personal Facebook account, he might be "friending" tech executives to help advance his innovation agenda.

Obama meets Thursday in San Francisco with Facebook co-founder Mark Zuckerberg, Google's Eric Schmidt and Apple's Steve Jobs to "continue the dialogue he promoted in his State of the Union address about government working with the business community to help build American competitiveness."

Hasselbeck likes at least one Obama

Elisabeth Hasselbeck, the conservative co-host on ABC's "The View," has routinely bashed President Obama's policies -- and even his character.

She had nothing but praise, however, for his wife at a fashion event recently.

"I've seen her on a number of occasions, and she knocks it out of the park. I think she's such a fantastically strong, fortunate woman, and she dresses in a way I think many women like to dress," Hasselbeck said. "She's confident, she feels comfortable in her clothing, she's feminine and beautiful. I think she really understands who she is."

Ugandan President Yoweri Museveni is reaching out and touching someone -- his nation's citizens, according to Reuters.

"So the ruling party's so-called robocalling of voters has floored many ahead of Friday's presidential poll," the article said.