Is Trump 'flip-flopping' or evolving? 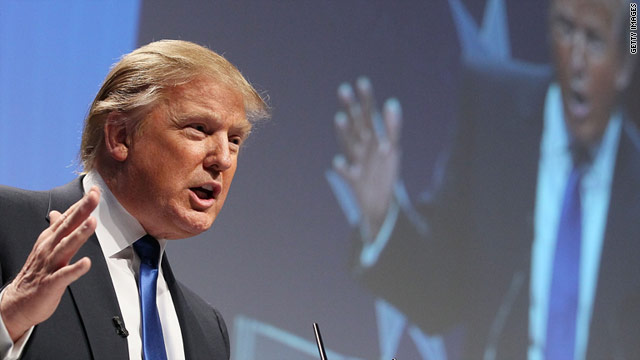 Washington (CNN) -- If the Republican Party's nominating process were like Donald Trump's TV show "The Apprentice," could he avoid hearing the words "You're fired"?

"The Donald," as the host of the NBC show, holds competitors to high standards. Consistency is encouraged as well as sticking with one's decisions. But can the would-be Republican presidential candidate meet his own test -- and will conservatives hire him?

In a recent interview, Trump declared that he believes "strongly in just about all conservative principles," is "pro-life" and against gay marriage. He has attacked President Obama's health care law and said that the United States has become the "laughingstock" of the world.

This is the same Donald Trump who has changed party affiliation from Republican to Independent to Democrat and back to Republican, according to a report.

Trump has said in interviews with CNN that he identifies more with Democrats than Republicans; that the party handles the economy better than Republicans; that President George W. Bush was "probably the worst president in the history of the United States"; and suggested that Bush should have been impeached for what Trump called "lies" over a "horrendous mistake": the Iraq war.

In 1999, while flirting with running for president under Ross Perot's Reform Party, Trump told the New York Daily News that he supported abortion rights and universal health care.

Trump and his representatives at the Trump Organization did not immediately respond to CNN's request for comment.

How Trump would shrink federal deficit

In a Monday interview, Trump defended his conservative bona fides.

"I'm a very conservative person. I'm very big into the military. I'm a great guy for defense," Trump told Greta Van Susteren of Fox News. "I am probably as conservative as anybody on your show, and that's going a pretty strong step."

He added: "I'm a very conservative Republican. I believe strongly in just about all conservative principles."

Those comments come on the heels of Trump's appearance last week at the Conservative Political Action Conference, the high-profile gathering that traditionally serves as an early proving ground for GOP presidential hopefuls.

But Trump's party allegiance, and likely his political principles, could come in to question should he announce a presidential bid.

"I am going to form a presidential exploratory committee," he told CNN's Larry King when he was considering a 1999 run. "And if I felt I couldn't win, I wouldn't run. .... I'm not looking to get more votes than any other independent candidate in history, I'd want to win."

A Daily News report from Monday said that Trump registered with the Independence Party in October 1999, switching from the GOP. The paper cites New York City Board of Elections records.

Trump ultimately never ran for president under the party. And his party ties appear to have changed more since then.

The paper also reported that he became a Democrat in August 2001, according to election records. And in 2004, the real estate mogul praised some Democratic efforts.

In March of that year, CNN's Wolf Blitzer asked whether he identified more as a Democrat or as a Republican.

In a March 2007 interview with Blitzer, regarding Sens. John Kerry and John Edwards -- who'd lost the presidential race less than three years prior -- Trump said, "That was a shame that that race was lost." He added this about Kerry: "I'm so upset that he blew it."

It was then that Trump unleashed a harsh criticism of Bush.

"Well, I think Bush is probably the worst president in the history of the United States." Trump cited the war in Iraq, calling it a "total disaster" and added later: "Look, everything in Washington has been a lie. Weapons of mass destruction -- it was a total lie. It was a way of attacking Iraq."

In the same interview, Trump was again asked if he felt more aligned with Democrats or Republicans.

"I'm very much independent in that way. I go for the person, not necessarily the party. I mean, I vote for Republicans and I vote for Democrats," he said.

Months later, just more than a year before the 2008 presidential election, Trump again talked with CNN. He reiterated his belief that Bush was the worst president in U.S. history and claimed that he would be politically toxic to the eventual GOP presidential nominee.

"I think President Bush has to go into a corner and hide, if a Republican is going to get elected," Trump said. "There is no way he's an asset. He's a huge liability."

Mere weeks before the election, Trump amped up his criticism.

In October 2008, while praising House Speaker Nancy Pelosi as "impressive," Trump said he'd initially thought she would go after Bush. "It just seemed like she was going to really look to impeach Bush and get him out of office, which, personally, I think would have been a wonderful thing."

Bush "lied," Trump claimed. "He got us into the war with lies."

That sensational claim has been repeatedly denied by Bush administration officials. A central argument by his administration was that faulty intelligence contributed to the decisions in the run-up to the Iraq war.

To be sure, Trump has taken stances that many Republicans favor: In addition to criticizing Obama at CPAC and questioning the president's re-election chances, Trump supported John McCain in the 2008 presidential race. In an interview with Blitzer in September, Trump said: "I have friends that weren't involved in the health care battle that are now calling me and, in one case, he said his health care bill ... is going to be over $100 million higher than last year."

In the same interview, Trump praised the Tea Party movement as "powerful," decried high income taxes for the wealthy as potential threats to U.S. jobs and blasted what he called the U.S. "spending like drunken sailors."

And yet, Trump also repeated his support for a major issue that's anathema to many Tea Party activists and other conservatives: the bank bailout.

"You had to do something to shore up the banks, because ... you would have had a run on every bank," Trump said.

He said he acknowledged some conservatives' view that ailing banks should have been allowed to fail: " 'If they go out of business, everybody would, that's fine.' "

In its Tuesday article, the Daily News quotes Trump as saying this about his changing political affiliation: "I wanted to decide which party best suited my philosophy."