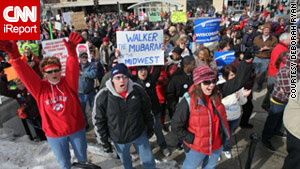 (CNN) -- Furor over a bill that would strip Wisconsin public employees of most of their collective bargaining rights and have them pay dramatically more for benefits drew at least 10,000 protesters to the state Capitol on Wednesday and forced the cancellation of classes in one large school district because of a teacher sick-out.

Republican Gov. Scott Walker said he is dealing with a budget crisis. Employees and unions contend his bill is an assault on worker rights.

Walker is asking legislators to pass his "Budget Repair Bill" to combat a $137 million shortfall through June 30. An upcoming two-year budget for 2011-13 must address a pending $3.6 billion deficit, he said.

In a budgetary scenario being played out in other cash-strapped states and municipalities, the legislation requires workers to cover more of their health care premiums and pension contributions, although supporters say local governments will decide on health care contributions for their employees.

The bill has prompted protests from public employees and supporters. On Tuesday, an estimated 13,000 people thronged Tuesday to the Capitol, followed by 10,000 Wednesday, said Carla Vigue, spokeswoman for the Department of Administration.

Unions said the number of protesters was much higher.

Sign-carrying protesters jammed the Capitol rotunda on Tuesday and Wednesday, chanting "Kill the bill" and "Workers Unite." Thousands more marched outside in the snow.

The governor, who took his campaign for the bill to his Twitter account, said he was talking with some legislators about protections for workers.

Walker's press secretary, Cullen Werwie, said he expects the measure to reach the Senate on Thursday and, possibly, the Assembly (lower chamber) on Friday. Both chambers are controlled by Republicans, but the legislation likely faces a tougher test in the Senate.

Under the bill, public employees in the Wisconsin Retirement System would pay about 5.8% of their salaries toward pensions, up significantly from 0.2%, Werwie said. And state workers would pay for 12.6% of their monthly health care premiums, up from between 4% and 6% percent.

Pay raises would be limited to inflation, unless a referendum approves of a larger increase.

"This is not something unusual," Walker said of the employee contributions. "That is what middle-class workers in this state have experienced."

The governor visited private businesses on Tuesday, arguing the bill would end furloughs and prevent layoffs.

"People viewed what we are proposing as modest," he said.

The changes do not apply to police, firefighters and state troopers, who would continue to bargain for their benefits.

But the proposed curtailing of most collective bargaining rights among public employees has drawn the most vocal complaints. There are about 300,000 state and local workers in the heavily unionized state.

Of 425 primary and secondary school systems, for example, employees at all but two are covered by AFT-Wisconsin or the National Education Association, Kennedy said.

Walker, he said, is ignoring $100 million in previous employee concessions and wants to take his measure directly to a vote rather than negotiate.

Calling Wisconsin a "state in turmoil," Kennedy said the debate is "not a financial issue. It is about worker rights."

His group is calling for more rallies on Thursday to "keep the pressure on."

The website for the American Federation of State, County and Municipal Employees featured a video of interviews with union workers.

"This is the state where collective bargaining for public employees started," one said. "If Wisconsin falls, so does the nation."

Ken Syke, a spokesman for the Madison Metropolitan School District, said about 40% of 2,600 teachers, assistants, social workers and psychologists in the bargaining unit called in sick, forcing the district to cancel Wednesday's classes for 24,500 students.

Because of the budget imbroglio, the district warned teachers that they would be docked pay if they were sick Wednesday through Friday and returned without a note from a medical provider, Syke said. They may face other sanctions.

Although Superintendent Daniel A. Nerad wrote Walker, asking him to return to the table to discuss collective bargaining, he also has said "our No. 1 responsibility is to instruct students," Syke said.

Some students left school Tuesday to join the protests, the spokesman said.

Many states, including California and New York, are grappling with budget deficit crises.

The budget, which increases spending by $1.7 billion from the previous year and closes a $13 billion gap, slashes programs for the elderly, the poor and the disabled, but leaves education funding largely untouched. No layoffs of state workers are suggested.