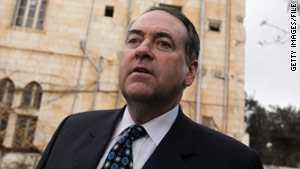 "We pay little attention to who we elect for president, obviously," Huckabee said Tuesday.
STORY HIGHLIGHTS

During his speech in Orlando, Huckabee said since hosting his weekly weekend shows on Fox News, people in airports and on the streets recognize him more now than during his presidential run three years ago.

Huckabee spoke about the importance of getting the word out to pregnant women that there's an alternative to abortion.

Media and advertising, he said, have been at the forefront of every culture change.