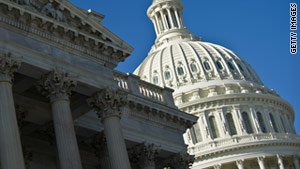 Washington (CNN) -- The U.S. House of Representatives voted Monday to extend three provisions of the Patriot Act and Intelligence Reform bill that are due to expire next month.

The bill passed by a simple majority vote of 275-144. The same measure failed last week by a vote of 277-148, which fell short of the 284 needed to pass then because it was considered under a House rule that required a two-thirds majority. The bill extends the provisions through December 8.

Before the vote, Representative Lamar Smith, R-Texas, called on his fellow congressmen to pass the "common-sense provisions that prevent terrorist attacks, protect the American people and preserve civil liberties."

Another provision, Section 215, allows the FBI to apply to the FISA court to issue orders granting the government access to any tangible items in foreign intelligence, international terrorism and clandestine intelligence cases.

Legislators opposing the extension called it "intrusive and "unconstitutional," taking particular issue with the section on wiretapping.

"I do not accept the argument that in order to be safe it's necessary to give up our rights and freedoms," said Representative Bobby Scott, D-Virginia.

Representative James Sensenbrenner, R-Wisconsin, dismissed such arguments, however, saying, "This law has not trampled on anybody's civil rights. ... I'm getting a little irritated at the scare-mongering going on about this law" when no provision has been declared illegal by the courts.

The White House and some Democrats prefer a longer extension of the three provisions, through 2013.