For GOP, 2012 campaign starts at CPAC 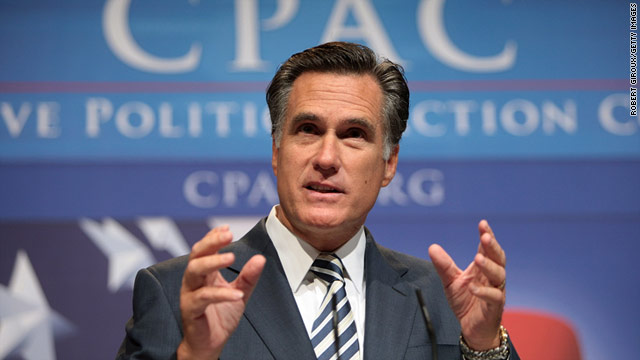 Washington (CNN) -- Thousands of conservative activists are descending on the nation's capital this week for the annual Conservative Political Action Conference, a three-day political carnival of speeches, strategy sessions and after-hours networking.

With less than one year to go before the Iowa caucuses, this year's event has added significance: A bumper crop of would-be GOP presidential contenders are slated to address the conference in an effort to burnish their conservative credentials and charm the Republican base.

Most of the candidates making serious noise about seeking the Republican nomination will appear at CPAC, with only a few exceptions -- notably former Alaska Gov. Sarah Palin and U.S. Ambassador to China Jon Huntsman.

CPAC kicks off on Thursday and runs through Saturday. CNN.com will have live coverage of the entire event.

Here's a guide of what to watch for:

Rift on the right

"This is a crowd that Reagan spoke to when he was president," said Greg Mueller, a veteran conservative communications consultant in Washington. "This is a God and country patriotism crowd. It's pretty much across the board conservative."

But a nasty rift emerged late last year after CPAC organizers announced that the pro-gay Republican group GOProud would be "a participating organization" at the event.

And social issues will no doubt be on the minds of conference attendees on Friday night, when Indiana Gov. Mitch Daniels delivers remarks.

Daniels, a well-known budget hawk who is seriously considering a presidential run, sparked outrage among social conservatives last year when he called for a "truce" on issues like abortion and same sex marriage until the nation's economic problems are solved. He continues to defend the position.

Former Massachusetts Gov. Mitt Romney has been tagged with the rather dubious distinction of being the "Republican frontrunner" despite the fact that many grassroots activists who participate in caucuses and primaries still harbor suspicions about his conservative bona fides.

Few dispute, though, that the former Massachusetts governor -- who maintains a national profile in the wake of his costly but unsuccessful 2008 presidential bid -- has the most to lose of anyone in the 2012 field.

"Let Freedom Ring" President Colin Hanna, who attends a weekly closed-door luncheon in Washington with other conservative heavyweights to hash out strategy, said his fellow activists are hardly united behind a single candidate. With Indiana Rep. Mike Pence out of the 2012 mix, he said that the lunch group is partial to either former Minnesota Gov. Tim Pawlenty, former Pennsylvania Sen. Rick Santorum, former radio host Herman Cain, Palin or DeMint.

While Romney is not officially a candidate, the message he delivers on Friday morning is likely to offer clues as to how he plans to protect his right flank during the Republican primary fight.

Romney, a successful businessman, is all but certain to drill down on economic matters. But the health care law he enacted as governor of Massachusetts, which the Obama administration touted as a model for their controversial national reform plan, is certain to be the elephant in the room when he addresses an audience of rock-ribbed conservatives.

The rest of the pack

The rest of the early GOP field is jammed with lesser-known candidates hoping to catch fire at some point before the Iowa caucuses next February.

An electrifying CPAC performance could help a candidate make the early leap from dark horse to credible contender - an important distinction in the crucial race to raise money and line up key endorsements.

Presidential straw polls are rarely consequential. These nonscientific surveys happen at Lincoln Day Dinners and grassroots meetings across the country in the year preceding a presidential election. A candidate's supporters can try to game the outcome with clever organizing, and the makeup of the "electorate" varies widely from state to state, from convention to convention.

But straw polls can have a hand in driving a narrative and stirring up presidential buzz - especially when they sample a crowd as large as the one expected at CPAC.

When the results of the poll are revealed on Saturday, would strong showings by New Jersey Gov. Chris Christie or DeMint nudge them toward entering the 2012 fray?

CPAC, which began in 1973, has long reveled in anti-liberal speechifying and bomb-throwing rhetoric.

Ann Coulter is annually one the event's biggest draws. Last year, Florida House candidate Allen West accused Democrats of "enslaving the American people" with the ideologies of Chairman Mao and Karl Marx. At CPAC 2009, DeMint and Huckabee were among the first prominent Republicans to label Obama a "socialist." And the conference's headliner in those soul-searching months after the 2008 election was none other than radio host Rush Limbaugh.

But in the aftermath of January's mass shooting in Tucson, Arizona, the political world was consumed with talk of whether the nation's discourse had become too heated and divisive. Will the Republicans eyeing the White House dial back the bombast when they take the CPAC stage?

"In lieu of Tucson, yeah, I think some of the candidates will be more cautious about the words they choose," said one unaligned Republican strategist who did not want to be quoted giving advice on the matter to the potential candidates. "Rhetorically speaking, I think there will be some caution used, but that doesn't get in the way of some of those issues you can talk about at the 30,000-foot level."