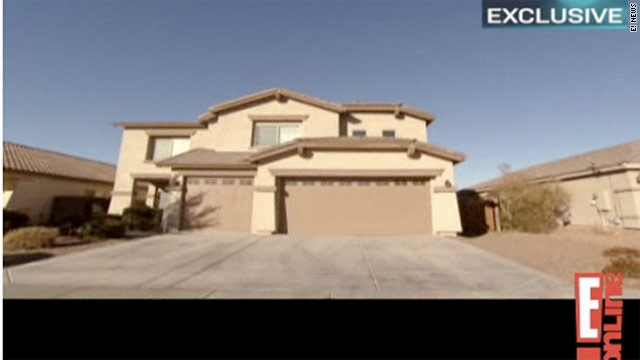 E! News got a peak inside Bristol Palin's new stucco-laden pad near Phoenix, Arizona, and no detail is left untouched.

"Now Bristol Palin is giving E! an exclusive look at her new home, her new life and her new love," anchor Giuliana Rancic said in the story, currently on E!'s website.

That new love -- Gino, an Alaskan pipeline worker who looks a lot like her ex-boyfriend Levi Johnston -- is prominently displayed in a picture.

Bristol said she doesn't have any friends in Arizona, but that she's not worried because she's "grown up really independent and pretty fearless."

She will release a memoir in the near future, according to the New York Daily News.

The memoir is set to come from William Morrow & Co., a subsidiary of HarperCollins, which published her mother, Sarah Palin's "Going Rogue: An American Life" and "America by Heart: Reflections on Family, Faith and Flag."

Details of the book, however, are still under wraps.

Sad news for Ed and Midge

It was announced Tuesday that liberal lightning rod Keith Olbermann will anchor a prime time new/commentary show on the cable network Current TV.

Olbermann, who abruptly left MSNBC two weeks ago, will begin his show "later in 2011," according to a statement from Current TV.

The die-hard liberal will also serve as chief news officer and have an equity stake in Current Media, which was co-founded by former Vice President Al Gore.

"Nothing is more vital to a free America than a free media, and nothing is more vital to my concept of a free media than news produced independently of corporate interference," Olbermann said. "In Current Media, Al Gore and Joel Hyatt have created the model truth-seeking entity. The opportunity to partner with Al, Joel and Mark Rosenthal makes this the most exciting venture in my career."

"President Obama served a (Super Bowl) menu that featured food from both Wisconsin and Pennsylvania. Which explains why this morning, President Obama tested positive for diabetes" -- Conan O'Brien

"Before the game, Secretary of Homeland Security Janet Napolitano told everybody that if you see something not right at the Super Bowl, let somebody know. Immediately, 50 million people called after Christina Aguilera did the national anthem" -- Jay Leno

The New York Post reports that Chelsea Clinton and Marc Mezvinsky "made themselves visible around town over the weekend in what looked like a calculated campaign to knock down swirling rumors of a troubled marriage."