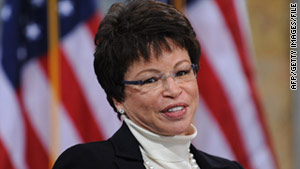 Obama adviser Valerie Jarrett reportedly mistook a top general for a waiter at a dinner.

(CNN) -- Four-star Army Gen. Peter Chiarelli -- the No. 2 general in the U.S. Army -- says he is absolutely not offended that Obama adviser Valerie Jarrett mistook him for a waiter at a fancy Washington dinner this week and asked him for a glass of wine.

It could have happened to anybody, Chiarelli tells CNN.

"It was an honest mistake that ANYONE could have made. She was sitting, I was standing and walking behind her and all she saw were the two stripes on my pants which were almost identical to the waiters pants -- REALLY. She apologized and will come to the house for dinner if a date can be worked out in March," Chiarelli wrote in an e-mail.

In fact, when military personnel wear their dress uniforms of short jacket and striped trousers to black-tie parties, they themselves often make jokes to each other about waiting tables. Chiarelli, a veteran of Iraq, wears a chestful of medals, which Jarrett apparently did not see.

The incident was first reported on the website Daily Caller, which said Chiarelli, who oversees the Army's programs to help ill and wounded troops from the war, went ahead and got Jarrett a glass of wine. Chiarelli tells CNN that's not exactly what happened.

"As a 'laugh' I poured her a glass of wine -- it was only good fun. Yes, it was an honest mistake and anyone who says otherwise is trying to make it something it was not," Chiarelli said.