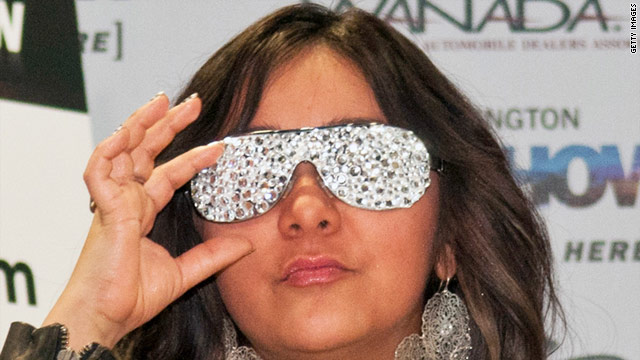 Jersey Shore's Nicole "Snooki" Polizzi, appearing at the Washington Auto Show in D.C., weighed in on who's cuter -- Bush or Obama, according to the Washington Post's Celebritology blog.

The Shore's little diva said, "I thought George Bush was pretty cute... for an old man."

Wait, who's my senator?

New York Magazine's "Daily Intel" blog reports that Snooki came face to face with New York Sen. Chuck Schumer at Reagan National Airport this week -- and gave him quite the snub. Snooki, it should be pointed out, is from New York.

"As Schumer waits, she doesn't even acknowledge his presence. Schumer leaves after a few seconds because he is a senator. A flustered cameraman asks Snooki if she knows her senator just passed by, and Snooki says, 'Oh, really?' "

D.C.'s own 'Young and the Restless'

Washington Life magazine is out with its "Young & the Guest List" edition featuring, as you'd guess, young D.C. power players.

FishbowlDC has the scoop on who's in and who's out.

Some of those getting the spotlight? Facebook's Andrew Noyes (who appears on the cover), Washington Post's Ezra Klein and Roll Call's Jackie Kucinich, among others.

8. I'm the guy in the photo that comes with your picture frame.

2. I have absolutely no idea where my birth certificate is.

1. Oprah is my half-sister.

Rep. Dana Rohrabacher, a Republican from California, let it be known that he learned to drink from The Duke himself, actor John Wayne, according to Roll Call.

Potential GOP presidential candidate Michele Bachmann says she is worried that the new airport screening technology could lead to nude pictures of her being leaked out, the Minneapolis Post reports.

Getting medieval on the border

Reuters reports that Mexican smugglers attempted to use a "hefty catapult to hurl drugs north over the U.S. border."

The military found in their possession: "45 pounds of marijuana, a sports utility vehicle and a metal-framed catapult just south of the Arizona border near the small town of Naco last Friday, following a tip-off from the U.S. Border Patrol."

A college classmate of former first daughter Barbara Bush told The Daily Beast in reference to Bush's recent open support for same-sex marriage: "Was she liberal? She always seemed that way to me, but I guess I had friends who were Republicans and it didn't really come up, because even my Republican friends from Yale are liberal in the way they conduct their social lives."

'The Kennedys' sees the light of day

"The Kennedys" miniseries, starring Katie Holmes and Greg Kinnear, has finally found a home after being turned down by several cable channels after pressure from members of the Kennedy clan.

The buyer? ReelzChannel. It will air on April 3.

Jay Leno: "Experts now say the protests in Egypt were started by bloggers. Bloggers started the whole thing on Facebook. The No. 1 choice to replace Mubarak? Justin Bieber."

Conan O'Brien: "Egyptian President Hosni Mubarak announced not long ago he will not run for another term as president. That's the good news. The bad news -- this spring he's taking over for Regis."

Jimmy Fallon: "The weather has been insane today. The Midwest got over a foot of snow. It rained ice pellets in Dallas. It's wet and freezing in New York. Yeah, I was complaining about that all day to my friend in Egypt."