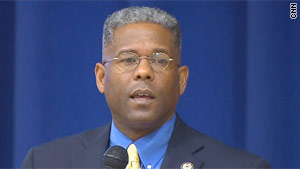 Florida Rep. Allen West had a confrontation with an Islamic activist at a town hall meeting.
STORY HIGHLIGHTS

The tense exchange drew boos from a standing room only, largely Republican crowd.

The confrontation came as West, an Iraq War veteran who was backed by the Tea Party in last November's election, took questions from constituents. Nezar Hamze, executive director of the Council on American-Islamic Relations in Miami, stepped to the microphone and accused West of making anti-Muslim comments in the past.

"Me and my children choose to follow the faith of Islam. You consistently insult it. How can we expect you to defend our right and practice Islam as far as the Constitution is concerned?" Hamze asked.

"I will always defend your right to practice a free religion under the First Amendment," West said. "But what you must understand, if I am speaking the truth, I am not going to stop speaking the truth. The truth is not subjective," he continued to loud applause.

West's comments on Islam have stirred controversy in the past. He recently said Muslim Rep. Keith Ellison, D-Minnesota, represents "the antithesis of the principles upon which this country was established."

The new GOP congressman pulled no punches commenting on the political crisis in Egypt, drawing parallels between the chaos in that country and the 1979 revolution in Iran. West said the U.S. must stop the Egyptian militant group, the Muslim Brotherhood, from seizing power.

Monday night's event was one of the country's first town hall meetings since the near assassination of Democratic Congresswoman Gabrielle Giffords at a constituent event in Tucson, Arizona, in January. The tragedy was followed by calls from Republicans and Democrats to tone down political rhetoric.

Determined to meet with his constituents once a month, West says he is taking his own precautions to stay safe. West, who has a permit to carry concealed weapons in Florida, also suggested to reporters he will be armed at some of his events.

"I've had a concealed weapons license for quite some time, about the last two to three years, and I take it upon myself and my personal responsibility, but I choose the venues in which I'll carry," West told CNN.

Asked if he was carrying a gun Monday night, West replied, "I can't tell you that."

The audience at Monday's meeting sounded more like a pep rally than a town hall. West's promises to oppose the new health care law and efforts to raise the nation's debt ceiling drew rounds of applause. It was a sign that many Tea Party activists still plan to attend these constituent events, if only to cheer on members of Congress they support.

Still West encouraged his opponents to speak up at his town halls.

"If there is someone here who resides in Congressional District 22 who did not vote for Allen West, I want to hear from you," West said. "I want to know how I can better serve you and be a better representative."