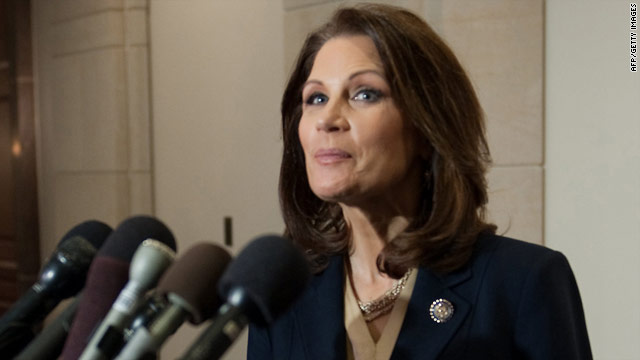 Washington (CNN) -- Politics is serious business -- but not all the time. From the halls of Congress to the campaign trail to the international stage, there's always something that gets a laugh or a second glance.

Meghan McCain had some choice words for Rep. Michele Bachmann, a Minnesota Republican who delivered a Tea Party response after the State of the Union address. The move was widely criticized by the media, Democrats and even some Republicans.

In an interview on MSNBC's "Last Word," McCain said that Bachmann is not a leader, "and she's not the leader of the Republican Party."

"Michele Bachmann is no better than a poor man's Sarah Palin."

What would OOTUS say?!

If you're wondering, OOTUS stands for Oprah of the United States. It's the name given by comedians to the media maven for her support -- and what some call her powerful influence -- in getting Barack Obama elected president.

Enough of Oprah. Let's turn to her BFF, Gayle King. The New York Post's Page Six reports that during a screening of Obama's State of the Union address at Le Cirque restaurant in New York, she nodded off.

"Within 15 minutes (of the speech's start), she started to doze off with pen and pad in hand."

To be fair, King did admit to audience-goers earlier in the night that she had a really bad cold. Next time, take a non-drowsy medication.

Homeland Security is getting rid of the much-mocked color-coded terror alert system, which has been in place since the 2001 terrorist attacks.

The alert system -- indicated by colors and terms like "elevated" -- is being replaced by a "system designed to give law enforcement and potential targets critical information without unnecessarily alarming or confusing the public," USA Today reports, citing lawmakers and a Department of Homeland Security briefing paper.

Chaos ensued at the Pennsylvania State House when Democrats and Republicans butted heads. CNN has the video

'Footloose' on the Hill

"I just want to say hello, shake their hands, sing some songs and hope they say, 'Oh, yeah, I like music! This is a good thing,' " he said.

Time magazine's Mark Halperin has outed the anonymous author of the upcoming novel on the president, entitled "O."

Not your father's 'Tube'

Obama is holding a YouTube interview Thursday to answer questions submitted by viewers.

It is part of a series of events in which top administration officials are talking directly to Americans about administration policies set out in Tuesday's address to a joint session of Congress.

Rep. Dennis Kucinich is no fan of pit-filled olives, and now he's doing something about it: taking one of Congress' cafeterias to court.

In 2008, the Ohio Democrat purchased a sandwich wrap filled with olives at the cafeteria in the Longworth Office Building. After biting into the wrap, he cracked a tooth, according to the legal complaint.

Now he has come forward with a $150,000 lawsuit against the cafeteria -- run by Restaurant Associates and other groups -- for providing "dangerous" sandwiches.

Caller, you're on the air

The Arizona Republic reports that Bristol Palin, who recently bought a house in the Phoenix area, could soon become the city's next radio DJ.

"I'm working on a few different projects," she told Anchorage, Alaska, KWHL's the Bob & Mark Show. Palin said she's aiming for a job on the radio.

"I'm going to meet with them and see if it's actually legitimate and see if I would like the guy I would be on air with."

Jon Stewart: "Last night, Barack Obama delivered his second State of the Union address -- along with what appears to look like a buddy comedy screenplay he believes Joe Biden and John Boehner would be perfect for. It's called 'Motormouth and Waterworks.' "

Jimmy Kimmel: "Either (Michele Bachmann's) cue cards are in the wrong place, or she's keeping an eye out for immigrants."