Obama will have a special Sputnik moment in Wisconsin town 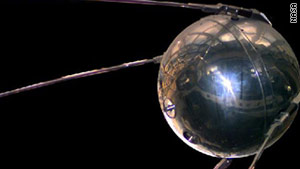 The launch of Sputnik 1 in 1957 marked the start of the space age and the U.S.-U.S.S.R space race.
STORY HIGHLIGHTS
RELATED TOPICS

(CNN) -- Have you been wondering why Manitowoc, Wisconsin, is the first stop for President Barack Obama after his State of the Union address?

Could be that he wants to continue his conversation with American families about rebuilding the nation's economy. Or that he wants to lift Democratic blues that Wisconsin will turn red in the next election.

Nah. Any true space cadet will tell you that Manitowoc was chosen for its "Sputnik moment."

In his speech Tuesday night, Obama spoke of this generation's Sputnik moment, challenging America to take the next innovative leap forward. Where else to launch that new course of direction but in the tiny Lake Michigan town that's best known for its own Sputnik moment.

And it was a whopper.

On September 6, 1962 -- when Obama was but a mere lad, John F. Kennedy occupied the White House and the Cold War was raging -- a 20-pound hunk of smoldering metal fell from the sky and crashed in the middle of Manitowoc's Eighth Street.

Turns out it was a piece of the Soviet satellite Sputnik IV.

The Sputnik moment that Obama referenced happened when the Soviet Union launched the first-man made object into space -- Sputnik I in 1957 -- shocking the United States into a technological boom. Sputnik IV came five years later. It burned up in the atmosphere and ended up linking Manitowoc to Sputnik in a way no other American town is.

Two Manitowoc police officers noticed what looked like a piece of cardboard lying in the street, according to the Rahr-West Art Museum, which sponsors a Sputnik festival in Manitowoc every year.

They approached the glowing object and kicked it to the curb, thinking it was a piece of slag from a local foundry. Wrong!

After they heard about Sputnik IV breaking up in space, they realized what they had stumbled upon and rushed back to retrieve it from the gutter. It was sent to the Smithsonian Institution for analysis and was confirmed as a piece of the Soviet satellite.

The Soviets eventually reclaimed their precious chunk. But Manitowoc was forever etched into the history of space exploration, a fact that is now celebrated each year with Sputnikfest.

"48 years later. ... It's wacky! It's tacky! It's time to celebrate with Sputnikfest!" says the festival's website. "Be hokey, fun, and ridiculous!"

Elaine Schroeder, a Rahr-West Art Museum staffer, said she watched Obama's speech Tuesday night and after he spoke of the Sputnik moment, she wondered: Is this why he's coming to my town?

"Oh my gosh," she said to herself. "I wonder if he knows we have a (Sputnik) replica here."

No matter, Schroeder said, Obama's visit to Manitowoc is sure to be cosmic.