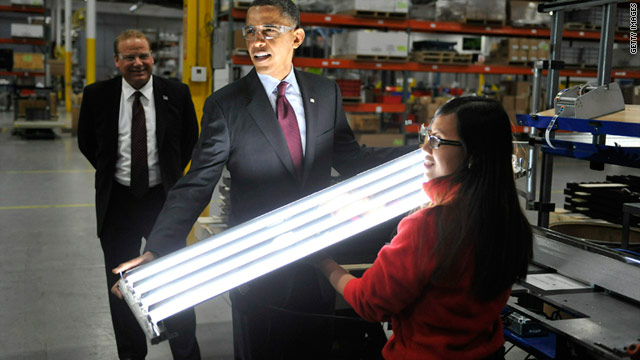 Obama: Need to get behind clean energy
STORY HIGHLIGHTS

(CNN) -- President Barack Obama toured solar and wind energy companies in Wisconsin on Wednesday, touting the clean energy products made and jobs created there as examples of the kind of innovation America needs to compete globally in the 21st century.

Obama told workers at Orion Energy Systems in Manitowoc that their company is part of the push needed to reach goals he set in Tuesday night's State of the Union address -- producing 80 percent of the nation's electricity from clean energy sources by 2035, and having 1 million electric cars on the road by 2015.

Obama also toured Skana Aluminum, a company that plans to hire about 30 more employees this year, and Tower Tech Systems, a wind turbine tower manufacturer that started in 2003 and has grown to more than 300 employees.

Also Wednesday, as part of the follow-up to the State of the Union speech, Vice President Joe Biden went to Indiana to tour Ener1 Inc., which makes batteries for electric vehicles and received a $118.5 million Recovery Act grant in 2009. Other members of Obama's Cabinet went to destinations in Missouri and South Carolina.

The companies visited reflect the change in U.S. manufacturing needed to create jobs and increase the nation's share of a growing global market, Obama said.

He noted that Neal Verfuerth, the CEO of Orion Energy Systems, has received help from the Department of Agriculture, the Small Business Administration and other government tax credits and assistance to build the company and develop products such as a lighting fixture that produces more light with half the energy.

"A lot of times Wall Street doesn't want to take a chance on a good idea until they've seen it proven," Obama said. "Sometimes research is required (and) nobody wants to pay for it. That's where we have to step in."

He added: "America needs to get behind entrepreneurs like Neal."

In response to the State of the Union address and Obama's Wisconsin visit, new Republican National Committee Chairman Reince Priebus said Wednesday that the president needs more than rhetoric to tackle high unemployment and the growing national debt.

"We need to stop the out-of-control spending in Washington that's hurting our economy and job creation," Priebus said. "What we need is limited government and free enterprise."

In a possible jab at such Republican calls, Obama praised Verfuerth for his determination to succeed instead of taking a more cautious route in the face of competition from China and elsewhere.

"Here in America, we play to win. We don't play not to lose," Obama said, later adding: "If we're on defense, if we're playing not to lose, somebody else is going to lap us. There's a lot of hungry folks out there."

Wearing clear protective glasses, Obama spoke to workers in the three companies and witnessed manufacturing that included the energy-efficient lights developed by Verfuerth. After a demonstration, the president said: "This is how we're going to win the future."