Obama to take YouTube questions on State of the Union speech 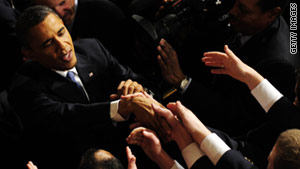 President Obama is following up on his State of the Union speech with online and in-person appearances.
STORY HIGHLIGHTS

Washington (CNN) -- As part of a White House offensive in support of this week's State of the Union speech, President Barack Obama will hold a YouTube interview Thursday to answer questions submitted by viewers.

The interview on YouTube at 2:30 p.m. ET is part of a series of events in which top administration officials are talking directly to Americans about administration policies set out in Tuesday's address to a joint session of Congress.

Later Wednesday, senior administration officials David Plouffe and Stephanie Cutter were holding a conference call to discuss a range of issues important to "young Americans," according to a White House web posting on the State of the Union speech.

Along with Obama's YouTube interview Thursday, Vice President Joe Biden will answer questions from the public in a Yahoo interview, and four top administration officials will participate in online discussions answering questions submitted via Facebook, the online social network.

"Throughout the week, we'll have plenty of ways for you to get involved and ask questions of President Obama and other senior administration officials about the State of the Union address," Plouffe said in an e-mail Tuesday announcing the outreach around the speech.

Obama: Need to get behind clean energy
RELATED TOPICS

In the hourlong session, which can be seen on a video posted at www.whitehouse.gov/SOTU, questions involved Obama's economic proposals, policy issues such as education and clean energy, Sudan, the wars in Iraq and Afghanistan, North Korea and other subjects.

Some questions were challenging, such as one that expressed skepticism at restoring the United States as a world leader in education, but in general, the inquiries indicated participants were supporters of the administration instead of ideological opponents.

When asked if the United States would remain engaged in Sudan following the recent secession referendum in South Sudan, Rhodes called the question a good one for the forum of young people.