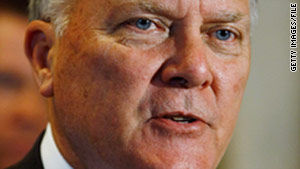 An illustration in a Georgia newspaper depicts Gov. Nathan Deal as a Nazi.
STORY HIGHLIGHTS

Atlanta (CNN) -- A Spanish-language newspaper in Georgia has drawn bipartisan criticism for publishing a doctored photograph depicting the state's new governor as a Nazi.

El Nuevo Georgia Editor Rafael Navarro said the picture was meant to call attention to Hispanic issues -- and grab the attention of residents and politicians who often ignore the Hispanic community.

"Americans don't read our paper because they can't read Spanish. They don't read our news, our editorials and the opinion of the community. But if they see a picture, they'll get it," he said.

The accompanying story, entitled "Repression in the Age of Deal," recaps an ethics investigation against Deal and talks about the governor's past financial troubles. The full-page article also quotes local community leaders forecasting tough times ahead for illegal immigrants in the state.

One leader quoted is Democratic state Rep. Pedro Marin -- one of only two Hispanic legislators in Georgia.

Marin condemned the photo and said he did not know about it when he spoke to the newspaper.

"It is disrespectful," Marin said. "I might disagree with the policies of Governor Deal, but I respect him and the office he represents."

Marin said he understands firsthand what it means to be the target of inflammatory rhetoric.

"Ever since I got elected and began supporting immigrant issues, I have received hate mail and my house and car have been vandalized," he said.

Marin said the photo might make it harder for the Hispanic community to communicate with state leaders.

Deal, who took office earlier this month, has not spoken out about the photo. His spokesman, Brian Robinson, issued a statement saying, "Those who can't formulate a coherent argument in our society's marketplace of ideas often resort to childish, even offensive tactics. This is pathetic."

Navarro, who immigrated to the United States from Colombia, said he printed the picture knowing he didn't have to fear retaliation from the governor because of the freedom of speech guaranteed by the U.S. Constitution.

Marin recognizes that right, but also said that responsibility comes with freedom, adding that "it is a shame that he decided to print the photo to sell more papers"

El Nuevo Georgia prints about 40,000 copies every month. Navarro admits that after other local media started to report on the controversy, traffic to the paper's website rose to record levels.

But Navarro said the picture represents the fear immigrants in Georgia feel with the arrival of Deal to the state's top office, because of Deal's strong anti-immigrant rhetoric during the last campaign.

Navarro pointed to Deal's support of legislation similar to laws enacted in Arizona aimed at tough enforcement against illegal immigrants.

Deal was elected last November. He won the Republican primary, edging out a former secretary of state who was endorsed by former Alaska Gov. Sarah Palin. Then he defeated Democrat and former governor Roy Barnes.