So much for civility in politics 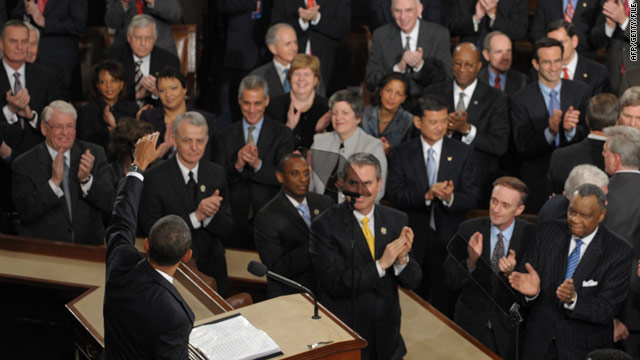 Some lawmakers from opposing parties plan to sit together during next week's State of the Union address.
STORY HIGHLIGHTS

Washington (CNN) -- If it's over, it was nice while it lasted.

The brief period of civility in politics in the wake of the shootings in Tucson, Arizona, two weeks ago was tested this week. Some in the nation's capital forgot the call for a government that's worthy of 9-year-old shooting victim Christina Green.

Washington returned to its toxic ways at times this week as House Republicans sought to repeal the new health care law. Democratic Rep. Steve Cohen of Tennessee compared GOP charges of a "government takeover of health care" to lies spread by Nazis before the Holocaust. "A big lie just like (Nazi propagandist Joseph) Goebbels," Cohen said on the House floor.

Cohen tried to spin away his comments with half-apologies. "I didn't compare the Republicans to Nazis," Cohen told CNN. His explanations circled back to talking points. "While I regret that anything I said has created an opportunity to distract from the debate about health care for 32 million Americans ... I never called Republicans Nazis," he said in a statement released by his office. Later on MSNBC, Cohen conceded, "I do think the rhetoric needs to be toned down."

Likely GOP presidential candidate Rick Santorum is riding a wave of publicity after saying President Barack Obama's race should influence his views on abortion. On the question of whether the unborn should have civil rights under the Constitution, Santorum said in an interview on a conservative website, "I find it almost remarkable for a black man to say, 'Now we are going to decide who are people and who are not people.' "

Obama once said the matter was above his "paygrade," a comment that still angers the anti-abortion rights community, a key GOP voting bloc in which Santorum is popular.

"I'm not apologizing," the former senator from Pennsylvania said. "I will agree with you that when I used the word 'black' all of a sudden it gives people a reason to say, 'He was trying to make some kind of racial comment.' I was not."

On Friday morning, Santorum filled in as a guest host on the Bill Bennett radio show. "If there is a discussion to have, it's the issue of race and abortion," Santorum said on the program. Activists from the anti-abortion movement went on the air to congratulate Santorum for framing abortion as a civil rights issue.

"The analogy between the slavery debate in the 19th century and the abortion debate in modern times is a solid one," wrote Curt Levey on the website redstate.com.

Who's to blame for the overheated rhetoric, the politicians or the media that give them airtime?

"The news media have some responsibility not to reward those who break the bounds of civility by awarding them lots of airtime," said Larry Sabato, director of the University of Virginia Center for Politics. "When Cohen's asinine remarks are reported, it ought to be put in the context of the (health care) debate -- that is, 99% of the House members behaved well."

Sabato argues the quality of political discourse has improved after Tuscon.

But check the blogs. On the website, theloop21.com, a blogger questioned whether the still-recovering congresswoman, Gabrielle Giffords, should give up her seat less than two weeks after being shot in the head. Giffords is beginning the next stage of her rehabilitation Friday in Houston.

In the article "Who Controls Rep. Giffords' Seat -- Her or the People of Arizona?" John S. Wilson suggests the congresswoman is too incapacitated to fulfill her duties in Congress.

"Should constituents allow members to hold onto their seats like political Brett Favres with no concept of when it is time to go?" Wilson asks. The article gained attention after being posted on the website of former Bush speechwriter David Frum, Frumforum.com.

Perhaps next week will be different. Late this week, a growing number of Republican and Democratic members of Congress have stepped forward to say they will sit together rather than on opposite sides of the aisle during next week's State of the Union address.

The idea was first proposed by the bipartisan Washington think tank Third Way and advanced by Democratic Sen. Mark Udall of Colorado, one of the group's board members.

Democratic Sen. Mary Landrieu of Louisiana plans to sit with her GOP colleague from Maine, Sen. Olympia Snowe. "Although Olympia and I are members of different political parties, we are first and foremost Americans," Landrieu said in a statement.

Others in Congress appear suspicious of the calls for civility.

Rep. Paul Broun, R-Georgia, blasted the idea of a bipartisan seating arrangement at the State of the Union as a Democratic "trap."

"And sitting together being kissy-kissy is just another way to try to silence Republicans and also to show, to keep the American people from seeing how few of them that there are in the U.S. House now, and when people stand up to what the Democrats are doing when Barack Obama spews his venom," he continued, "then if they're scattered throughout the Republicans, it won't be as noticeable if the Republicans sit apart."

Tell that to Republican Sen. Tom Coburn of Oklahoma, who will sit with Democratic Sen. Chuck Schumer of New York. Other "state-mates," as they are being called, include Sens. Amy Klobuchar, D-Minnesota, and Pete Sessions, R-Texas.

The pairings make for some political odd couples. But perhaps they offer hope for the kind of government that's worthy of our 9-year-olds.