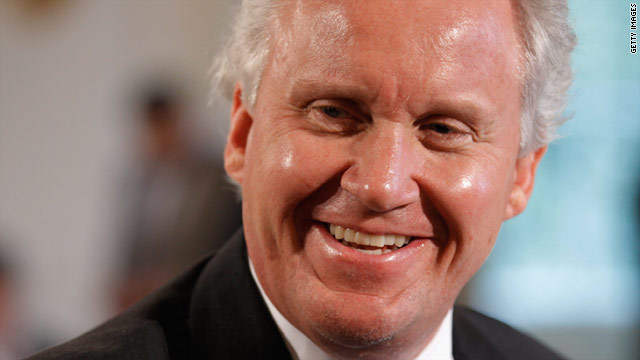 Washington (CNN) -- President Obama announced the creation of an economic advisory council Friday that will be headed by Jeffrey Immelt, the chief executive and chairman of General Electric.

The President's Council on Jobs and Competitiveness will replace the Economic Recovery Advisory Board that was headed by former Federal Reserve Chairman Paul Volcker.

Volcker's board helped pull the economy "back from the brink," Obama said. Immelt's panel will be charged with "putting the economy into overdrive."

"Jeff's somebody who brings a wealth of experience to the table," Obama said. "We think GE has something to teach businesses all across America."

Obama made the announcement while visiting a GE plant in Schenectady, New York.

"There's no easy button to push to make the economy suddenly better, but every day, we see more signs of life," Immelt told CNN soon after the announcement.

The new council leader said he thinks manufacturing is key to recovery and urged companies to develop markets overseas.

Top Republicans did not offer an opinion of the president's decision to tap Immelt for the post but used the occasion to rip Obama's economic policies.

"For the last two years, Americans have been asking for a focus on job creation and reducing the barriers to American competitiveness," said Senate Minority Leader Mitch McConnell, R-Kentucky.

"What they got instead was an exploding national debt, a trillion-dollar stimulus that failed to reduce the unemployment rate and a health spending bill that's already leading to higher costs and massive burdens on our job creators -- in other words, the opposite of competitiveness. ... Unless the panel's first recommendations are to reverse the damage the policies of the last two years have done to the business climate, job creation and the exploding national debt, I fear it will do more to create good public relations for the White House than good jobs for struggling Americans."

The establishment of the new panel is the latest in a series of economic policy moves made by the White House in the new year.

Two weeks ago, the president tapped Treasury aide Gene Sperling as the new director of the National Economic Council.

Sperling, who succeeds economist Larry Summers as head of the council, currently is a counselor to Treasury Secretary Timothy Geithner. Among other things, he helped lead the administration's tax negotiations with congressional Republicans during December's lame-duck session of Congress.

Sperling also headed the National Economic Council during the Clinton administration. Top Democrats are pointing to Obama's decision to have him head the council as another sign the president is leaning more heavily on Clinton-era veterans as he starts working with a divided Congress.

The U.S. economy continues to try to dig itself out of the job losses created by the recession that began in 2008.

In its most recent unemployment report, the Labor Department said the U.S. economy added 103,000 jobs in December, while the unemployment rate fell from 9.8% to 9.4%.

Obama noted that there have now been 12 months of private-sector job growth for the first time since 2006.