How did Obama's salesmanship stack up with China? 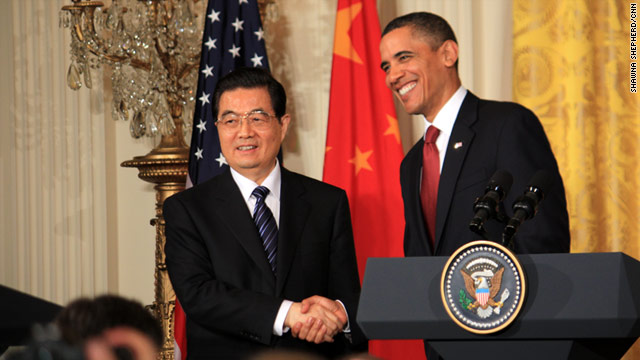 Helping American companies sell more to China's mother lode of 1.3 billion potential consumers was at the top of the president's to-do list at this summit. After all, China is now the world's second-largest economy after the United States.

But the U.S. and China now are intertwined on a complex web of issues, from security to human rights, and Obama raised all of them during his talks with the Chinese president.

Obama was eager to tout $45 billion in U.S. export deals to China, which he said would create 235,000 American jobs. Some of those deals were already in the works but were announced at the summit to create a bigger bang.

Rep. Chris Smith: Hu should be at Hague

On the hot-button issue of China's undervalued currency, Obama noted that China has allowed the yuan to increase in value by 3.6%. "There has been movement," he said, "but it's not as fast as we want."

On trade, the American president racked up some points, winning promises from the Chinese to address the core concerns of U.S. businesses:

A senior administration official tells CNN the Chinese promise on "indigenous innovation" was "very positive" but there was still more to be done on protection for intellectual property and government procurement.

Some of the economic wins for the president came at the 11th hour, after difficult negotiations at senior levels. That's not uncommon at summits, this official says.

"They (the Chinese) wanted to give their positives to President Obama directly," he says. "This was a summit and they wanted to underscore that these were issues to be dealt with by their president and our president together."

But he sees storm clouds on the horizon regarding China's currency.

"Congress is growing increasingly impatient," he said, "and absent sustained progress, will likely take matters into its own hands in the coming months."

Obama also moved Hu a bit on North Korea, winning a statement of "concern" over the North's claim that it is enriching uranium.

That shift began before the summit in December when Obama telephoned Hu, says Douglas Paal, longtime China expert and vice president for studies at the Carnegie Endowment for International Peace.

The Obama administration was frustrated by China's hands-off approach to increasing belligerence by the North, as it sank a South Korean naval vessel last March and fired on civilians on Yeonpyeong Island in November.

"The Chinese had been sitting on their hands on N.K.," said Paal, who served on the National Security Council staffs of Presidents Ronald Reagan and George H.W. Bush. After Obama's phone call there was a quick reaction. Beijing dispatched its foreign minister to Pyongyang, "and the North Koreans pivoted on a dime away from escalation and controversy," said Paal.

On the perennial irritant in U.S.-China relations, Obama pressed his case more aggressively than during the first two years of his administration, bringing up the case of imprisoned human rights champion Liu Xiaobo in his talks with Hu Jintao.

Traditionally, in run-ups to summits, the U.S. asks for -- and sometimes gets -- freedom for dissidents in the other country.

But when the Nobel Committee awarded Liu the Peace Prize, "it turned the Chinese from Jell-O into steel," Paal said. Pushing for more during the summit wasn't possible under the atmosphere of the Peace Prize, he said.

But Obama did need to prove to Americans that he was not weak on human rights. Hence this tough, but nuanced comment at his joint news conference with Hu.

"I have been very candid with President Hu about these issues. Occasionally, they are a source of tension between our two governments. But what I believed is the same thing that I think seven previous presidents have believed, which is, is that we can engage and discuss these issues in a frank and candid way, focus on those areas where we agree, while acknowledging there are going to be areas where we disagree."

That comment inched Hu to a rare admission that China could improve its human rights record.

"China is a developing country with a huge population and also a developing country in a crucial stage of reform. In this context, China still faces many challenges in economic and social development. And a lot still needs to be done in China in terms of human rights."

Toting up the summit "score card," the Carnegie Endowment's Paal calls it a "pretty successful trip."

"The real measure of it will be, 'does the amity and cooperation that's been promised by the two sides stick for the next 18-24 months?' We can't really pronounce it's a true success until we've seen that," Paal added.