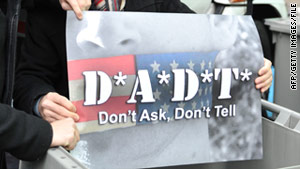 The study looks at gays and lesbians forced to leave the military from 2004 to 2009.
STORY HIGHLIGHTS

Washington (CNN) -- It cost more than $193 million for the Pentagon to implement the policy of removing gays and lesbians from military service over six years, a study says.

The Government Accountability Office, the congressional watchdog agency, looked at the cases of 3,664 active duty personnel forced to leave the service from 2004 to 2009 because of the ban on gays and lesbians serving openly in the military.

The cost came to an average of $52,800 to take each person out of the military and find and train a replacement, it found. And the report released Thursday says that 40% of those service members had skills in a "critical" occupation or foreign language such as Arabic, or both.

Of the cases examined by the GAO, 39%, or 1,442, service members who were removed under the "don't ask, don't tell" policy held "critical occupations" such as infantryman. Less than 1%, 23, had foreign language skills, like Arabic or Spanish, according to the report.

But the GAO noted that the number of people with critical skills and occupations might be even higher because of problems compiling the information.

Congress approved a repeal of the "don't ask, don't tell" policy and President Obama signed that change into law in December. The Defense Department is now drafting its plans to implement the change. But for now the policy remains in force.

Opponents of the ban had long claimed that it caused a talent drain on the military, forcing soldiers with critical skills to leave the military at a time when the nation was fighting two wars.

Rep. Susan Davis, D-California, asked for the study. She said the GAO report solidifies her belief in the repeal.

"Clearly this was the right thing to do," Davis said in a statement released by her office. "No longer will American taxpayers continue to pay to throw out patriotic service members who want only to serve their country."