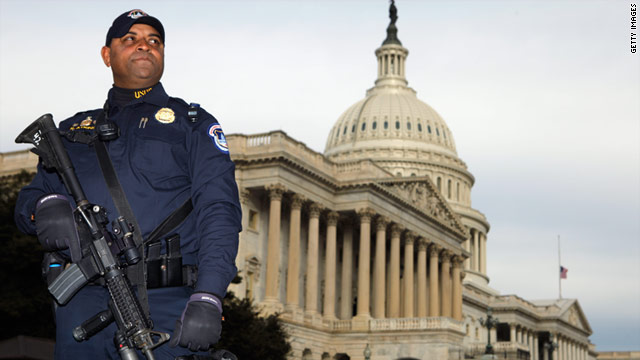 Lawmakers back at work after shooting
STORY HIGHLIGHTS
RELATED TOPICS

Washington (CNN) -- A week after the assassination attempt against Rep. Gabrielle Giffords, her colleagues in Congress have a message for constituents: their job is not changing.

"What do you think about health care?" two-term Congressman Gerry Connolly, D-Virginia, asked a fellow diner at a restaurant in Falls Church, Virginia, Friday.

It's conversations like these that Connolly said he'll continue to have with voters, despite the actions of suspected gunman Jared Loughner in Arizona. In the past week, Connolly said he's made a number of public appearances and doesn't intend to change his accessibility.

"You can't put boundaries around yourself and the people you serve. Otherwise democracy itself gets compromised."

With Congress preparing to return to scheduled business, lawmakers across the country held events similar to the "Congress on your Corner" event where Loughner allegedly shot Giffords, an Arizona Democrat.

For Connolly, who served as a local government official before being elected to Congress, it's hard to go anywhere in his district without being noticed. "I attend dozens and dozens of events every work week. So I am a familiar face in the fabric of our life here because I live here."

Connolly commutes from the nation's capital to his northern Virginia home every day. "I drive home. I am in my district every night and every morning when I get up."

On this particular morning, a handful of people recognized the congressman as he had breakfast with some of his staff.

Connolly told CNN he and his staff have discussed security efforts but not much has changed.

Last week, the sergeant of arms for the House of Representatives issued a security memo to lawmakers and their staffs, and Capitol Police have said they are reviewing security measures, as well. Other lawmakers have told CNN they are meeting with their staff to discuss security concerns.

Connolly, who said he's received occasional threats, is reminding his staff to remain in contact with local law enforcement. At the same time, Connolly said he had a number of public events planned over the Martin Luther King holiday.

For staffers who travel with the congressman and are also active in his district, they said that while their safety is always in the back of their minds, they're not worried about returning to work.

"We trust the law enforcement here locally and certainly around the Capitol," said Connolly's chief of staff, James Walkinshaw. "They know what they're doing, and we're going to trust them to do their job, and we'll go about doing our jobs."