Top senators to sit together at State of the Union address 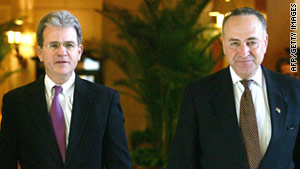 Washington (CNN) -- In a symbolic gesture toward more civil political discourse, Democratic Sen. Charles Schumer and Republican Sen. Tom Coburn said Sunday they will sit together at the upcoming State of the Union address.

Appearing on the NBC's "Meet the Press," Schumer and Coburn called for political debate based on issues and ideology, rather than motives and personal attacks, in the aftermath of the Tucson, Arizona, shootings last week that killed six people and critically injured Democratic Rep. Gabrielle Giffords.

Schumer acknowledged that sitting with Coburn for the president's annual speech to Congress would be symbolic, "but maybe it just sets a tone and everything gets a little bit more civil."

"We believe in discourse in America, we believe in strenuous discourse," said Schumer, who is from New York. "We don't sweep differences under the rug. Tom and I have real differences, but we can do it civilly."

Asked about the inflammatory political climate, Coburn rejected portrayals by some conservatives that President Barack Obama's agenda is anti-American or intended to harm the country.

"What we can't question is the president's love for our country," said Coburn of Oklahoma, later adding: "When we get in trouble is when we question motive rather than ideology."

Traditionally, Democrats and Republicans sit on different sides of the House of Representatives for the State of the Union address that also includes Cabinet members, military leaders, the Supreme Court and other government officials.

Last week, Sen. Mark Udall, D-Colorado, sent a letter to congressional leaders suggesting that Democrats and Republicans sit together for the January 25 speech.

"As the nation watches, Democrats and Republicans should reflect the interspersed character of America itself," Udall wrote in the letter. "Perhaps, by sitting with each other for one night, we will begin to rekindle that common spark that brought us here from 50 different states and widely diverging backgrounds to serve the public good."

"Well, I think it's a symbol, and a symbol is a very good place to start," Democratic Sen. Kirsten Gillibrand of New York told the CBS program "Face the Nation." "And so if we can actually come into that chamber and instead of me going to the left, I go to the right, and the Republicans do the opposite, what you're going to create is an image of the Congress deciding that we are going to work as a body, not as two separate sides. That's a very good place to start."

Republican Rep. Jeff Flake of Arizona said he expected more civil debate in the wake of the Tucson shootings, even if the issues and "the substance of the debate" won't change.

"I think that we Republicans, and I think Democrats alike, will realize that if we tone down the rhetoric sometimes, our debate is more effective from our own side," Flake said on the CBS program. However, old habits die hard, Flake acknowledged.

"It's easy to slip back into old ways," Flake said. "I think we can have the debates we need to with a more civil tone. And, frankly, I think that we'll find that that's more effective from both sides. But keeping that into the future is going to be a tough thing."

On the same program, outgoing Democratic Gov. Ed Rendell of Pennsylvania said a change in the hyper-partisan political discourse is necessary. Asked about the biggest changes during his two terms in office that end this week, Rendell said: "In my eight years, I've seen the level of partisanship and ideological posturing just increase and increase and increase and I think it's tearing the fabric of our government apart."

Rep. Debbie Wasserman Schultz, D-Florida, said the tone may change, but not the intensity.

"I don't plan to debate my values and the principles of my constituents any less vigorously," she said on the CBS program. "But I think it starts with us, and we have to lead by example. And so I think all of us need to be more careful about the words that we choose to use."