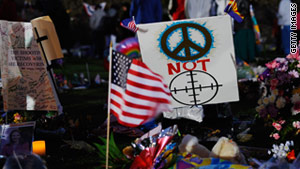 Washington (CNN) -- Bring back the ban on assault weapons, or tighten enforcement of existing gun control laws and regulations?

Those were two options for strengthening gun control offered Sunday by Democrats in the wake of the Tucson, Arizona, shootings last week that killed six people and wounded 13, including Democratic Rep. Gabrielle Giffords.

The limited range of ideas showed the power of the pro-gun lobby in Washington, with Democratic Sen. Charles Schumer of New York acknowledging that passing any gun control legislation was "hard."

"Let's be honest here -- there haven't been the votes in the Congress for gun control," Schumer told the NBC program "Meet the Press."

While outgoing Democratic Gov. Ed Rendell of Pennsylvania called for restoring the assault weapons ban that expired in 2004, Schumer instead proposed "looking for things where we can maybe find some common ground and get something done."

Republicans stuck to their traditional pro-gun stance, arguing that the Tucson incident involved a mentally unstable assailant rather than a symptom of lax gun control laws.

"If you have somebody that is a criminal, that wants to get around the law, they're going to get around the law," Republican Sen. Tom Coburn of Oklahoma said on the NBC program. "The problem with gun laws is they limit the ability to defend yourself, one. But number two, is that people who are going to commit a crime or going to do something crazy aren't going to pay attention to the laws in the first place."

Possible steps outlined by Schumer and other Democrats included limiting to 10 the number of rounds for ammunition magazines in semi-automatic weapons like the one used in the Tucson shootings, which had magazines holding more than 30 rounds.

The 10-round limit was part of the assault weapons ban, which was passed in 1994 under Democratic President Bill Clinton and allowed to expire 10 years later under Republican President George W. Bush.

Schumer also called for stronger steps to prevent mentally ill people from purchasing guns, and ensuring that the military notifies the FBI when it rejects candidates based on excessive drug use.

He said Tucson shooting suspect Jared Loughner was rejected for military service because of excessive drug use.

"By law that's on the books, he should not have been allowed to buy a gun, but the law doesn't require the military to notify the FBI about that," Schumer said. "In this case, they didn't."

Schumer defended both the constitutional right to bear arms, as well as the power of Congress to put some limits on weapon ownership and use.

Citing the success of previous gun control efforts, Schumer said that "smart, rational gun control laws that protect the right to bear arms, but have reasonable limits are the way to go."

Coburn, however, said approaching the Tucson shootings as a gun control issue would miss the central problem -- the failure to properly intervene in a case of obvious mental instability.

Former New York Mayor Rudy Giuliani, a possible Republican presidential contender in 2012, made the same point on the CBS program "Face the Nation."

He also said political civility must return so that a legitimate debate on gun control could ensue, free of the hyper-partisanship emblematic of Washington.

"I think we could take a look at gun laws and see what can be done that doesn't affect the constitutional rights that people have to have guns, the right they have to protect themselves," Giuliani said. "I mean, there are people that would argue that, if more people had guns, this may not have happened because somebody might have been able to take action immediately and stop him before he inflicted either damage or as much damage as he did."

On the same program, Rendell also said the issue required a thorough and reasoned debate free from excessive politicking.

"We need a rational discussion on guns where we put aside the pressure from interest groups and we take a look and say, does any citizen protecting themselves or their home or using a handgun to hunt, do they need a clip that has 33 bullets in it?" Rendell said, adding that in his mind, the answer was no.

"I think the nation's spirits would be lifted if the Congress acted quickly with the president and reinstated the assault weapons ban, which also had the ban on these large magazines, these clips that carried 30-plus bullets," Rendell added.