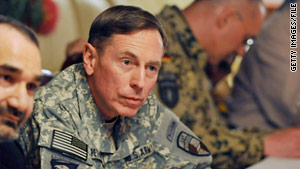 Gen. David Petraeus is one of only 12 four-star generals in the U.S. Army.
STORY HIGHLIGHTS
RELATED TOPICS

Washington (CNN) -- Members of the Senate and House armed services committees currently are talking to the Pentagon about the next round of hearings on Afghanistan, trying to coordinate sessions with the U.S. commander there, Gen. David Petraeus.

When Petraeus, probably the best-known military man in the wars of Iraq and Afghanistan, returns to answer questions, the television lights will shine on the four stars he wears on each shoulder.

Now a new debate is swirling in Washington, thanks to an opinion piece in the Wall Street Journal pushing for Petraeus to get a fifth star, like military giants of the past.

"The U.S. war against terrorism is now the longest war in U.S. history, and Gen. Petraeus has clearly distinguished himself as a leader worthy of the rank held by Gens. MacArthur, Marshall and Nimitz," Pete Hegseth and Wade Zirkle, of the group Vets for Freedom, wrote in the Wall Street Journal.

Hegseth served in Iraq with the 101st Airborne Division and is bound for Afghanistan. Zirkle, a Marine, deployed twice to Iraq.

They make the case that Petraeus deserves the higher rank and that others will benefit if he gets it.

"A promotion would properly honor his service -- and it would also honor the troops he leads and has led," they write. "Today's soldiers have fought as valiantly as any in American history, and they deserve recognition of their leaders. Congressional approval of a fifth star would demonstrate the nation's commitment to their mission."

Hegseth aid Thursday that the response to their suggestion has been overwhelmingly positive. He laughed off a question about whether he had heard from Petraeus himself, saying he didn't expect to.

"We're just hoping to gain some traction," Hegseth said. He said congressmen already have volunteered to push the promotion forward, although he said he could not provide names.

A spokesman for Petraeus would not discuss the idea with CNN.

Most senior officers are selected by a promotion board of their peers. But for three-stars and above, the president makes the choice, and the Senate must confirm the decision. Right now, including Petraeus, there are only 12 four-star generals in the U.S. Army.

Currently, there is no legislation allowing the appointment of officers to a five-star grade, according to Pentagon information. The last general receiving a fifth star was Omar Bradley in 1950, and it took a special law to make that happen.

Sen. Lindsey Graham, R-South Carolina, recommended a fifth star during a congressional hearing back in 2008, when Petraeus was leading the surge of troops in Iraq.

"If I could promote you to five stars, I would," Graham told Petraeus.

"An incredibly silly idea," says one answer to the question of the fifth star.

"As much as GOP want to deify him he's not a Washington or a Pershing," says another.

A supporter tweets, "He deserves by his achievements."

In the halls of the Pentagon, people shied away from questions. Asked about how the nuts and bolts of the promotion would work, one Pentagon worker admitted that it has been so long since Bradley that he didn't even know whom to call.

Another person, back from the battlefield, shrugged it all off.

"Most people do think it's laughable," he said. He didn't want to have his name tagged to any comment about a past or future boss.

The latest publicity is an echo of a call to elevate Petraeus: a July article in The Atlantic magazine.

The author, D.B. Grady, a former Special Forces paratrooper who served in Afghanistan, said that another star for Petraeus would give President Obama a chance to convince the U.S. military and allies that he's committed to the mission in Afghanistan.

"If you are wearing a uniform right now, and I talk to soldiers every day, there's a great deal of fear out there, a great deal of suspicion. President Obama needs a bit of bolstering in the military," Grady said. "Petraeus is deified in the military. It's win-win. With this there is no doubt that the world will appreciate we are taking it seriously in Afghanistan."

Critics of an additional star for Petraeus warn that it could interfere with the chain of command. He would outrank his superior at Central Command, Marine Gen. James Mattis, as well as the Joint Chiefs chairman, Adm. Mike Mullen.

But Hegseth says that should cause no problem, that Petraeus' stature already means he has direct contact with the White House and Congress and the secretary of defense.

Max Boot in Commentary magazine praises Petraeus but opposes the promotion, saying it would have a negative impact on the chain of command. He suggests waiting.

"I do think that when Petraeus is ready for retirement -- something that I hope will not happen anytime soon -- Congress should consider granting him another star if by that point he has turned around the war in Afghanistan as he did in Iraq," Boot writes on commentarymagazine.com.

There are no such concerns from Grady.

"It's just the nature of war today," he said. "Gen. Petraeus and Gen. Mattis are on equal footing. ... If Petraeus dropped dead tomorrow, hit by a stray bullet, or retired there is not another unifying force to speak out about the war in Afghanistan, the war in Iraq. He is the man."