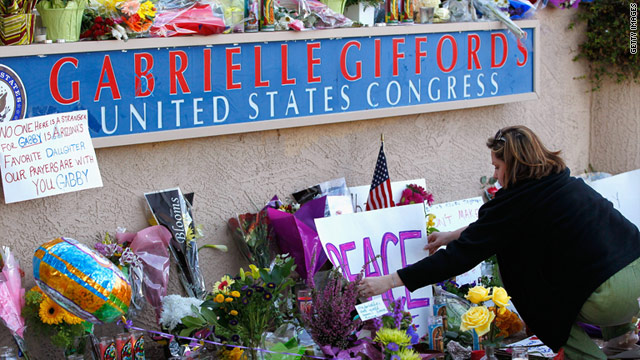 A woman places a sign at a tribute to Rep. Gabrielle Giffords outside Giffords' office in Tucson, Arizona, on Sunday.
STORY HIGHLIGHTS

In the wake of the terrible shooting at that congressional town hall meeting, it is simple to point to a rampant culture of easy gun access, intolerance, and anti-government fever and say, "Sure, this man was unbalanced, but the wild winds of the Grand Canyon State blew him over the edge."

Just ask Pima County Sheriff Clarence Dupnik, who jumped into the fray with his reaction. "Well, I think we're the Tombstone of the United States of America," he said, evoking his state's storied history. "We have become the Mecca for prejudice and bigotry."

Since then Dupnik has been assailed on TV, radio, and the internet as a grief-blinded malcontent by some conservatives, and praised as a clearsighted analyst by some liberals -- both sides armed with broad generalizations about Arizona.

But having lived out West for 10 years, I have a generalization of my own: Pundits in the East often make pronouncements about the world beyond the Mississippi, when their on-the-ground experience with such places consists of campaign visits, speaking engagements, and skiing trips. In other words, they're talking out of their Jackson Holes, if you know what I mean.

So I thought I'd look at some of the evidence to see if Arizona really has become unmoored from the rest of us -- a rogue state in which the unthinkable not only happens, but may be a byproduct of social and political unrest run amok.

I started with guns.

Could law have prevented shooting?

In August 2009, President Obama spoke in Phoenix, only to find a guy outside the hall making off with the headlines by showing up with a semiautomatic rifle slung over his shoulder. He said he was exercising his Second Amendment rights.

He picked the right place. Arizona has some of the nation's most lenient gun laws. You can buy, possess and carry a handgun there far more easily than in most places, and gun-control advocates were plenty worried long before these killings.

Gun-rights advocates counter that other places which have pioneered much more restrictive laws, such as the District of Columbia, still have higher violent crime rates. True. But the facts suggest that whatever problems Loughner faced, Arizona's laws made sure that getting a gun was not one of them.

Next, I looked at Arizona's sociopolitical climate, which seems to be broadly accepted as one of the hottest in the country. Among the flashpoints: cuts for Medicaid transplants, Gov. Jan Brewer's bizarre election claim that headless bodies were being found in the desert, and the always entertaining adventures of hell-for-leather lawman Sheriff Joe Arpaio. But the biggest one has been, and continues to be, illegal immigration.

Last year's controversial immigration law spurred protests, angry denunciations, and nationwide calls for a boycott. But often overlooked amid the noise: Polls found that a tremendous number of Americans all over agreed with the state's actions. And for anyone who wants to paint Arizona as the poster child for intolerance, this is worth noting: The FBI reports that there were 274 hate crimes in Arizona in 2009. That's pretty robust, but on a per capita basis, the state of Washington had about the same, and Massachusetts was considerably worse.

The Southern Poverty Law Center says Arizona has 10 active Patriot groups embracing extreme anti-government doctrines, and the Center's Mark Potok has found echoes of Patriot ideology in Loughner's rambling writings. "The relationship is indirect, and it is filtered through a mind that is not right," Potok tells me, but it is there.

So is Arizona's murky right-wing counterculture partially to blame for the shootings? "It doesn't seem unreasonable to look at something like this and consider its provenance," Potok says.

Probably so. After all, the Oklahoma City bomber, Timothy McVeigh, believed his attack would spur a popular uprising against the government and that an army of fellow travelers was waiting in the wings; and he did much of his planning while living in Arizona.

The problem is almost half the states, according to the Center's website, have as many or more Patriot groups, which would mean if we are going to connect these dots, that those states too are potential hotbeds in which violent, maybe mentally ill extremists could grow. For example, New York has 17 Patriot groups; Michigan, 47; Texas, 52.

We reached out to one of Arizona's most well-known Patriot groups, the Arizona Citizens Militia, which clearly portrays big government as an enemy and urges citizens to be prepared to defend their rights, their homes, whatever. Its website is packed with military imagery. These groups, in my experience, are notoriously media-shy and difficult to reach. And yet within minutes of my request for their views on the shooting, they sent this response:

"It makes your heart hurt for the entire country. This just keeps happening over and over again. The one common denominator seems to be that most of the shooters are mentally ill, but driven by current events. We don't have any answer either. We're just trying to do what we can to protect our country and our borders."

I suspect how people react to that message would tell me as much about the reader as it would about the writer. And maybe that's the whole point. The facts suggest that Arizona does have difficulties; certainly, it is near the upper end of states around which furious social and political debates are swirling.

It is not unfair to consider that some of the language, actions, and laws connected to those debates can combine with a violent, deranged mind to produce awful consequences. But Arizona is far from alone. If the shots had been heard in any number of other states, we might also hear the same innuendoes that are now being sneered at Arizona. The viciousness of our public debates, the dirtiness of our politics, the anger of our people are not confined to one town, one state, or one region. They are everywhere. Only the degrees are different.

How you see the facts on Arizona depends on how you come at them. As I said: Blaming Arizona is easy. But almost 7 million Americans live there, and all we know for certain is that one of them did something terribly wrong.