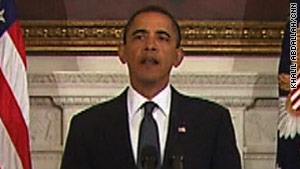 The official told CNN that Obama "expressed his deep concern and full support" for the family in the wake of the tragedy.

White House officials had noted on Saturday afternoon that Obama had placed a call to Kelly in the initial hours after the shooting in Tucson. But Obama initially had to leave a message for Kelly, a Navy captain and an astronaut, who was flying from Houston to Tucson to be at his wife's side on Saturday afternoon. Obama reached him later in the evening, according to the senior White House official.

Meanwhile, Obama was updated on the shooting investigation around 9 a.m. Sunday by his homeland security adviser, John Brennan, according to the senior White House official.

"The president will continue to be updated as appropriate in the coming days," said the senior official.

As for whether Obama might travel to Tucson later this week, a second senior White House official said no plans have been made but the administration is still "monitoring events closely" at this point.

At this point, Obama is not expected to make any public remarks on Sunday about the shooting.

That would allow FBI Director Robert Mueller, who was sent to Arizona at Obama's direction, to coordinate the investigation and take the lead on the government's public response during a planned news conference.

Flags at the White House were lowered to half-staff late on Sunday morning to honor the six people who died in the tragedy. Giffords is among the 14 wounded who are still alive.