Elizabeth Edwards' will leaves everything to her children 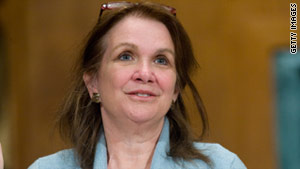 In Elizabeth Edwards' will, there is no mention of her estranged husband, John Edwards.
STORY HIGHLIGHTS

(CNN) -- Elizabeth Edwards left everything to her children, with no mention of her estranged husband, John Edwards, in her will.

"All of my furniture, furnishings, household goods, jewelry, china, silverware and personal effects and any automobiles ... to be divided among them ..." Edwards says in the document dated December 1.

It names her daughter, 28-year-old Catharine, as the executor of the will.

Elizabeth Edwards died on December 7 after a battle with breast cancer. She was 61.

Edwards has three children -- Catharine, Emma and John. Her son, Wade, died in a 1996 car crash.

She was diagnosed with breast cancer shortly after her husband lost his bid for vice president in November 2004.

Elizabeth Edwards: In her own words

In 2006, after her initial cancer diagnosis, she wrote "Saving Graces: Finding Solace and Strength from Friends and Strangers," which chronicled the aftermath of her son's death and her battle with the disease.

In 2008, months after withdrawing from the presidential race, John Edwards admitted that tabloid claims about an extramarital affair with former campaign videographer Rielle Hunter were true.

Eventually, he also admitted to fathering a child with Hunter -- an allegation he initially denied even after conceding the affair.

John Edwards said the affair happened in 2006 while his wife's cancer was in remission. He said he informed his wife at the time and asked for her forgiveness.

In an interview with the Detroit Free Press after her husband admitted to his affair, Elizabeth Edwards said the incident helped her focus on resuming her role as an advocate for the poor and for health care reform. She also said it pushed her to refocus on her role as a mother.

In a September interview on "The Nate Berkus Show," Edwards was asked what she sees when she looks at her estranged husband, John Edwards.

"I see the father of my children, and that's very important to me," she said. "Particularly since I have a terminal disease, this is the person who at some point will take over the primary parenting, and it's important to me that he heal, if he needs to."