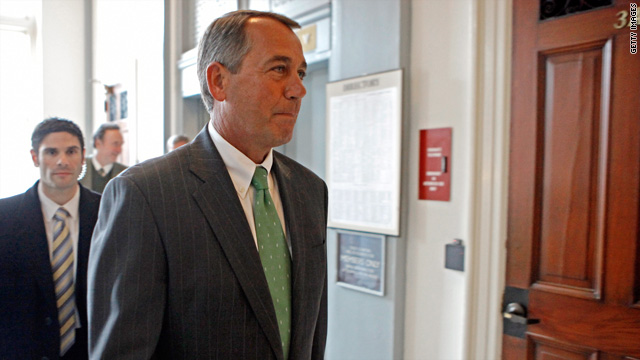 Washington (CNN) -- As the new Congress convenes Wednesday, the initial focus for Republicans, fresh off their 2010 midterm election victories, will start off symbolic with the legislative meat to be served shortly after.

House Speaker John Boehner recently laid out his vision for the upcoming session, vowing to make the "people's House" more transparent. His first order of business will be passing a new set of rules for the legislative chamber.

And in a move to satisfy the leanings of the Tea Party movement, which propelled the GOP to its historic takeover of the House, the Constitution will be read aloud on the House floor on the second day of the new session. In addition, all new bills must meet a constitutional test.

GOP leaders unveiled legislation Tuesday that would repeal the law. Republicans, according to House GOP sources, plan a key procedural vote on Friday and a final vote next Wednesday.

GOP agenda: The right 'to be dumb'

Many argue the repeal legislation is more symbolic than anything else. While it may pass the GOP-dominated House, its future in the Senate is uncertain. Democrats are still in the majority after all -- and if it gets passed the Senate, Obama can veto the legislation.

Republicans might control the House, but they don't have the two-thirds it would take to override a presidential veto.

But they might take another route -- cutting off funding to the law or changing parts of it.

Republicans are adamant the law is hurting jobs -- something that is topic No. 1 for them and a majority of Americans demanding change.

"Obamacare is a job killer for businesses small and large, and the top priority for House Republicans is going to be to cut spending and grow the economy and jobs," said Brad Dayspring, spokesman for newly minted House Majority Leader Eric Cantor, R-Virginia.

Only 37 percent, though, oppose the law because they believe it is too liberal. More than six in 10 Americans support specific provisions in the measure preventing insurance companies from dropping coverage for seriously ill people or denying coverage to people with pre-existing conditions.

Boehner has stressed that commitment to spending cuts will be a major issue. He pledged one of the first votes will be to cut his chamber's budget by 5 percent, which GOP aides say will save $25 billion.

Boehner also said the House GOP will roll back federal spending to 2008 levels, and he has promised weekly votes on spending cuts. When pressed for specific programs that would be cut, he declined to name any.

While scaling back spending to 2008 figures would save $100 billion in the first year, it falls far short of making any significant dent in the massive federal deficit.

Congress will also vote on Obama's budget, expected to be unveiled in a couple of months. Congress passed a continuing resolution to fund the government until March in the final days of its lame-duck session last month. Failure to reach a compromise on the budget and other funding programs could shut down government.

In the Senate, a move is under way to change the filibuster -- the procedure in which 60 votes are needed to move a bill from debate to a final vote. Changing the filibuster rule has drawn both support and ire. Many wonder, why change it now?

Julian Zelizer, a historian and CNN.com contributor, says changing the rules is not necessarily a bad thing.

"Some opponents of reform will certainly ask, given the recent coverage of the historic 111th Congress, whether procedural changes are really needed. Shouldn't senators just leave things alone?" he said in a recent CNN.com commentary. "The answer is no. The past three decades of congressional history have been marked by a filibuster frenzy."

He added: "Whereas senators once reserved filibusters for big issues such as civil rights, now they are willing to filibuster, or threaten to filibuster, everything that comes their way. In short, the filibuster has become a normalized tool of partisan conflict."

That partisan conflict was on full display in the last Congress with Republicans filibustering a number of Democrats' legislative items, such as the health care reform bill.

Another issue to draw the partisan battle lines -- raising the debt ceiling.

The debt ceiling, a cap set by Congress on the amount of debt the federal government can legally borrow, is currently set at $14.294 trillion.

According to the Congressional Research Service, failing to raise it could be devastating to the world economy: "Not only the default but efforts to resolve it would arguably have negative repercussions on both domestic and international financial markets and economies."

Rudolph Penner, the former Congressional Budget Office director, said that the default could hurt U.S. bonds, the dollar and investors' portfolios, adding that "our bond market and stock market would crash."

It's a sentiment echoed by Austan Goolsbee, chairman of the Council for Economic Advisers. Appearing on ABC's "This Week," Goolsbee said that if the debt ceiling isn't raised, the result could be "catastrophic" and "totally unprecedented in American history."

"The impact on the economy would be catastrophic," he said. "I mean, that would be a worse financial economic crisis than anything we saw in 2008."

Read more on the debate

Republicans have signaled they would use the upcoming debate on the issue to force spending cuts in exchange for support.

"I will not vote for the debt ceiling increase until I see a plan in place that will deal with our long-term debt obligations, starting with Social Security," Sen. Lindsey Graham, R-South Carolina, said on NBC's "Meet the Press" Sunday.

"On the spending side, I'm not going to vote for a debt ceiling increase unless we go back to 2008 spending levels, cutting discretionary spending."