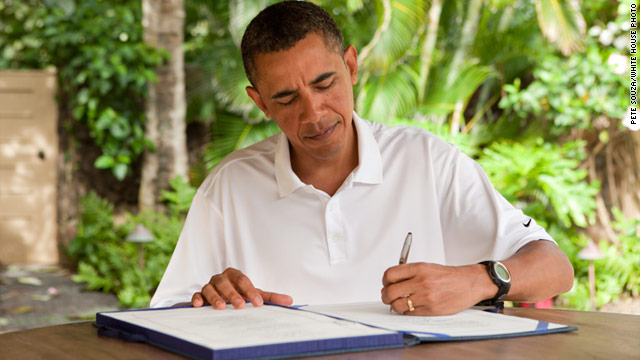 Obama signed the bill during his Hawaiian vacation, with no signing ceremony held. In a statement issued later, the president said he was "honored" to sign the bill, which pays for health care for responders believed to have been sickened by pollution at the ruins of the World Trade Center in New York.

"We will never forget the selfless courage demonstrated by the firefighters, police officers, and first responders who risked their lives to save others," Obama said. "I believe this is a critical step for those who continue to bear the physical scars of those attacks."

The bill made a long journey in order to get signed. A printed copy of the bill flew with a White House staffer from Washington to the Hawaiian island of Oahu, so Obama could sign it from his vacation rental in Kailua.

"It came out with a member of the staff so that it could be signed in a timely fashion," Burton said.

The legislation, officially titled the James Zadroga 9/11 Health and Compensation Act, provides health coverage to workers who helped clear the rubble and search for human remains at the site of the worst terrorist attack in U.S. history. The $4.2 billion legislation also reopens the federal Victim Compensation Fund to provide economic relief to those harmed by the attacks, which killed more than 2,700 people in New York, Washington and Pennsylvania.

After a contentious battle in which some Republicans suggested the legislation was creating a new entitlement program, it finally passed during the lame-duck session of Congress in December. New York lawmakers hailed the bill's signing.

"After a long, arduous path with several near-defeats, this bill is finally law," said Sen. Charles Schumer, D-New York. "The heroes who rushed to Ground Zero in the hours and days after the attacks will not be forgotten. These first responders were like veterans, and this law keeps with a time-honored tradition of standing by our veterans when they get harmed answering the call. We will begin work immediately to make sure this law gets renewed for another five years."

"Today, nine years after the devastation of 9/11, the United States has honored its obligation to the heroes and survivors of 9/11," Rep. Jerrold Nadler, D-New York, and one of the authors of the bill, said in a statement. "With President Obama's signing of our bill ... it is clear that the government has not forgotten the thousands who have served and suffered."

Rep. Peter King, R-New York and another bill author, said the law "is a great victory for the heroes of September 11th, the firefighters, police officers and construction workers. Justice is finally being served. A great day for America."

"At long last, the president's signature has ended our nine-year struggle to address the 9/11 health crisis," Rep. Carolyn Maloney, D-New York, and another author of the bill, said in a statement. "The Zadroga law will save lives and fulfills our moral obligation to care for those who rose to the defense of America in a time of war."

Maloney's statement compared the law to the War Hazards Compensation Act of 1942, passed in the aftermath of the attack on Pearl Harbor, which provided health care and financial relief to to civilians who assisted in recovering the bodies of the dead and salvage the remnants of the U.S. Pacific Fleet.

New York City Mayor Michael Bloomberg said in a statement, "I am encouraged that our elected representatives in Washington came together and stood by those who were there for America in its hour of greatest need."

Addressing the health impacts of 9/11 for responders "is a national duty" Bloomberg said.