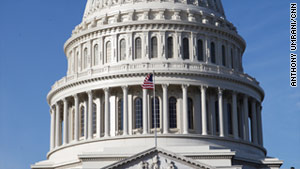 Washington (CNN) -- The new Republican-majority House will vote on repealing or changing last year's health care overhaul before the State of the Union address, Rep. Fred Upton, incoming chairman of the energy and commerce committee, said on "Fox News Sunday."

Upton, a Michigan Republican, said that his party had 242 votes in favor of repeal, and that "there will be a significant number of Democrats who will join us."

if the House does manage to repeal the health care bill, such a move would likely meet strong obstacles in the Democrat-controlled Senate and White House.

President Obama signed the Patient Protection and Affordable Care Act in March, after promoting Democratic-led health reform efforts for months after taking office. The law is widely considered to be the signature legislative accomplishment of the president's first two years in office.

Among other things, the measure was designed to help millions of uninsured and under-insured Americans receive adequate and affordable health care through a series of government-imposed mandates and subsidies. Critics have equated it to socialized medicine, fearing that a bloated government bureaucracy will result in higher taxes and diminished health care services.

Congressional leaders return to Washington Wednesday to open the first session of the 112th Congress.

In general, the theme for the new Congress will be one of more oversight over government spending and programs, Republicans said.

"The sooner the administration figures out that the enemy is the bureaucracy and the wasteful spending, not the other party, the better off we'll be," said Rep. Darrell Issa, R-California, on "Fox News Sunday."

The Justice Department, he said, has failed to investigate properly the leak of thousands of classified documents on the WikiLeaks website.

The failure to go after WikiLeaks founder Julian Assange was especially troubling to him.

"I think he needs to realize that, if the president says, 'I can't deal with this guy as a terrorist,' then (Holder) has to be able to deal with him as a criminal. Otherwise, the world is laughing at the paper tiger we've become," Issa said.