Why Europe has only a month to solve debt crisis

By Douglas McWilliams, Special to CNN 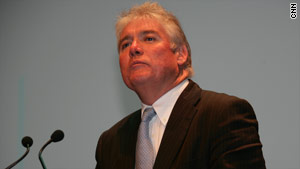 Douglas McWilliams is founder and Chief Executive of the Centre for Economic and Business Research (Cebr), one of Europe's leading economics consultancies. He was formerly Chief Economist for IBM and for the Confederation of British Industry, and President of the Economics Committee of Europe's employer federations.

(CNN) -- If Europe's leaders do not restructure the euro and European debt within a month, the markets will force it on them.

The highly publicised three-way phone conversation between German Chancellor Angela Merkel, French President Nicolas Sarkozy and Greek Prime Minister George Papandreou may have calmed the markets but it provides no solution for Europe's economic and banking woes. If anything, by delaying decisions, it makes the crisis worse.

As economic forecasters, we have the advantage of being able to use our models of the European economies to help evaluate the likely outcomes of different policies.

These models start from the knowledge that growth in the Western economies is likely to be fairly sluggish at best in the medium term. Against this background, the only countries that are able to get away with cutting deficits rapidly through deflationary policies are those with underlying export strength, like Ireland, or with the ability to devalue their way out of trouble like the UK.

Countries in the Eurozone can make some limited progress but are held back by the fact that their monetary policies and their currencies are fixed externally. This is especially the case for Greece, where exports, at less than 20% of GDP, are very low as a share for such a small economy. Ireland, by contrast, with admittedly a slightly smaller GDP, has exports at 90% of GDP and rising.

Because taxation in all economies is highly geared to growth, when GDP does badly the loss of tax revenue is huge.

Greek GDP is declining at around 5% per annum currently and this is reducing tax receipts by close to 10% per annum. This is the gap that has to be made up by higher tax rates and public spending cuts -- which themselves are negative for GDP growth -- even before making progress with reducing the budget deficit, let alone the debt ratio.

There was a hope a few months ago that growth in Germany and other parts of northern Europe would float the southern European economies off the rocks and back into a situation where an austerity programme could be managed without growth going negative. This now looks implausible.

With a much less optimistic forecast for economic growth in northern Europe, it is not actually feasible to expect the weaker economies to pay off their debt over any realistic time horizon.

Europe's leaders need to recognise this and devise a clean-cut solution to the problem before the markets do it for them.

An orderly solution would mean a restructuring of the euro into a hard and a soft currency so that southern Europe can become competitive and trade its way out of austerity. It would also include writing off part of the debts of at least Greece, Portugal and Italy and probably Spain; a bailout of the affected European banks especially in France; and the printing of money -- quantitative easing -- to cushion the program of fiscal adjustment.

When the new arrangements give certainty, it is likely that China will be prepared to invest as it looks to diversify out of its dollar holdings, though at the price of being declared a market economy for World Trade Organization (WTO) purposes.

Rhetoric from Europe's leaders that a restructuring of the euro means a collapse of the EU or even war between the countries as suggested by the Polish Foreign Minister Radek Sikorski does nothing to help and a lot to hinder.

European politicians have been in denial about the fact that the euro cannot work in its present form. If they do not adjust the European project into line with reality in an orderly manner, the markets will do it for them in a disorderly manner.

Europe's leaders are already facing severe political and legal problems as a result of their cack-handed attempt through the European Central Bank to force trading in euro-based financial services into the Eurozone by denying (as far as one can see, totally against both European Union and WTO rules) clearing house facilities to non-euro economies.

I would judge that Europe's leaders have a window of perhaps a month, maybe less.

Failure to act would mean riots, bank collapses and would set back economies for a decade or more.

For too long, economically illiterate politicians have tried to deal with Europe's economic and financial problems by covering them with ever thicker layers of sticking plaster. The markets will not accept this any longer -- as can be seen by the write down in French bank shares. They need to sort the problem out now.

The opinions expressed in this commentary are solely those of Douglas McWilliams.