Don't be fooled: MEK is a terrorist group

By Jamal Abdi, Special to CNN 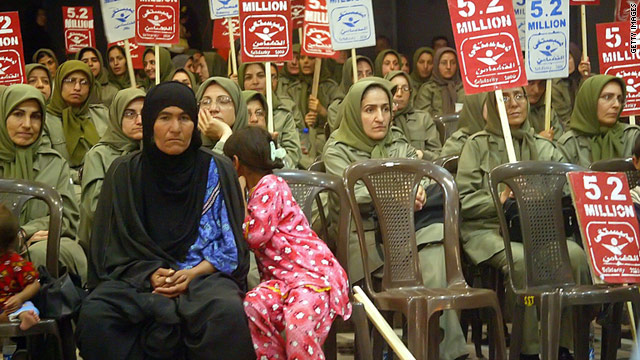 Editor's note: Jamal Abdi is the policy director of the National Iranian American Council, the largest grassroots organization representing the Iranian-American community in the United States. He previously worked in Congress as a policy adviser on foreign affairs issues. He is based in Washington.

(CNN) -- Is it possible that a terrorist organization that has killed Americans and tortures its own members could organize a massive lobbying campaign to manipulate U.S. national security decisions?

It's happening before our very eyes.

Secretary of State Hillary Clinton is due to decide soon whether the Iranian Mujahedin-e Khalq (MEK) should remain on the State Department's list of Foreign Terrorist Organizations or be delisted and free to raise taxpayer support for their operations.

The State Department says that throughout the 1970s, the MEK staged terrorist attacks inside Iran, and killed several U.S. military personnel and civilians working on defense projects in Tehran. It also says MEK members participated in the 1979 takeover of the U.S. Embassy in Tehran.

But while the MEK remains designated as a terrorist group, it has managed to leverage a caustic political environment in the United States, a humanitarian crisis in Iraq for which it bears significant responsibility and bundles of cash to pull off one of the most insidious pressure campaigns Washington has seen.

Recently, it came to light that many of about 33 former U.S. officials who have advocated delisting the MEK have been paid to speak at events sponsored by Iranian groups that want it off the list. Some of the officials have since quietly backed away, professing ignorance about the group that had presented itself innocuously as an "Iranian opposition movement."

Others, like Michael Mukasey and Howard Dean, have redoubled their efforts in the midst of criticism and recalibrated their message to urge for delisting on humanitarian grounds. But while there is certainly a humanitarian crisis for MEK members, the organization's leadership is directly culpable.

Opposing view: MEK is not a terror group and must be delisted

While the MEK's core leadership is based comfortably in Paris, some 3,400 of its rank-and-file members are based in the organization's Iraq compound, Camp Ashraf, along the Iranian border. There, they are held hostage to the MEK leadership's efforts to gain international support.

MEK advocates who claim support for the group on humanitarian grounds have not answered key questions about the group's inhumane practices, outlined by Human Rights Watch, including MEK's repeated threats of suicide as a negotiating tactic, according to a RAND Corp. study.

The study, commissioned for the Pentagon, says that 70% of the people at Camp Ashraf joined after the group moved to Iraq, and a "substantial number of these MEK members were lured to Iraq under false pretenses or did not have a clear understanding of the group's goals and methods of operation -- particularly with respect to its cult behavior -- and many have been forced to remain against their will."

Human Rights Watch has documented torture by MEK of members who have tried to flee. Those who have managed to escape report that the MEK prevents those in Ashraf from accessing telephones, television, Internet or any form of outside communication .

But the MEK leadership has cleverly leveraged its antagonism with the Iranian regime to exploit U.S.-Iran enmity and convince policymakers that the "the enemy of my enemy is my friend." In so doing, they have largely managed to deflect attention away from the MEK's shadowy practices and human rights abuses in Ashraf.

The MEK leadership in Paris has seized on deplorable actions by the Iraqi government, which views the MEK warily because of its close ties it had with Saddam Hussein, to argue for delisting.

Under pressure from Iran, Iraq has waged incursions into Ashraf that have resulted in shameful losses of life -- up to 34 killed. But instead of pursuing a true humanitarian solution, MEK leadership cynically used these events as public relations tools while obstructing serious proposals, because they would likely address MEK's own abuses.

The MEK has argued against any proposal that would let its members to leave the group. The New York Times reports that U.S. efforts to facilitate a humanitarian solution have been blocked by residents refusing to leave. The U.N. High Commissioner on Refugees has publicly offered to facilitate a refugee resettlement process but has stated that individuals at Ashraf have refused to renounce violence, a prerequisite to participating.

Ultimately, the driving force behind the MEK's campaign in the U.S. has come from the same circles that championed supposed dissidents such as Ahmad Chalabi and the Iraqi National Congress to build a groundswell of support for the U.S. to invade Iraq. Like those Iraqi exiles, the MEK enjoys no domestic legitimacy, yet claims to be Iran's "main opposition." Most of the officials who repeat this have no idea that the MEK is among the most reviled groups in Iran.

Kaleme, a publication closely associated with Iran's true "main opposition," the Green Movement, warned last week that delisting the MEK would be devastating to Iran's democracy and human rights movement. Such a move would bring back "bitter memories of anti-Iran policies, such as the 1953 coup" that toppled Iran's first democratically elected prime minister. A U.S. delisting of the MEK would also send a signal that we have turned our backs on the nonviolent democratic movement in order to back a violent group.

Many fear that a delisted MEK would help the regime taint the Green Movement while shifting competition with Iran's government from one of popular legitimacy -- where the nonviolent democracy movement is strong -- into a competition of violence, where the MEK prefers to operate but where the regime is strongest.

Any doubts about this violent agenda were dispelled last week at a pro-MEK conference that revealed in starkest terms yet how a delisted MEK would be used. "We need a very active tit-for-tat policy," said Lt. Gen. Thomas McInerney. "So every time they kill Americans, they have an accident in Iran."

"I know that may sound too militaristic," agreed former CIA official John Sano, "but you have to go with what your enemy understands."

Clearly, delisting the MEK has little to do with humanitarian concern or support for a democratic Iran but is instead a push for another disastrous war of choice in the Middle East.

The opinions in this commentary are solely those of Jamal Abdi.