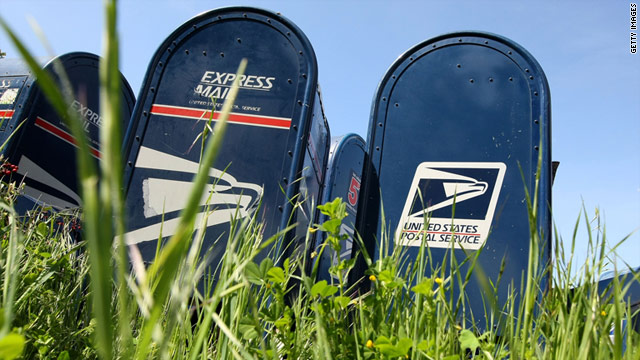 (CNN) -- The United States Postal Service shutting down because it is so low on money?

That's what Postmaster General Patrick R. Donahoe threatened this week, although few people believe that Congress or the White House would allow such a thing to happen.

Quite possible -- and the Postal Service insists such a step is necessary.

The process has begun.

Laying off tens of thousands of postal workers?

The Postal Service says it is inevitable.

However explicable the Postal Service's economic reasoning, the human pain caused by all of this is going to be enormous -- each of those men and women who will lose their jobs represents another family that will find itself with a breadwinner out of work in an abysmal jobs market.

We all understand that e-mail and text messaging have drastically changed the way that Americans write to each other. Over the course of a single year -- from 2008 to 2009 -- the Postal Service delivered 26 billion fewer pieces of mail. Those 26 billion pieces represent stamps that were never bought, and thus, operating revenue that the Postal Service never saw.

But almost lost in the current discussion of what can be done to salvage mail delivery is this fact of contemporary life -- a historic alteration of the national landscape -- that is already taking place:

The corner mailbox is disappearing.

Postal service on verge of collapse?

That seems like a small thing to note, in the face of those warnings that the entire Postal Service could have to shut down, and in light of the impending job losses.

But if you have been thinking that you haven't been seeing as many of those sturdy blue mailboxes as you once did, your eyes aren't deceiving you. And their removal from America's cities and towns is emblematic of fundamental shifts in the way daily life is led.

According to reporting done by Carolyn Jones of the San Francisco Chronicle, there were almost 400,000 of the blue mailboxes in 1985. Today there are only 160,000 left, with more being torn from the ground and carted away all the time.

The Postal Service, Jones reported, keeps a close eye on how many times we drop letters into our neighborhood mailboxes. If fewer than 25 pieces of mail a day make their way into a mailbox over a six-to-eight week period, that mailbox is flagged for removal.

In San Antonio, according to the San Antonio Express-News, the number of mailboxes has decreased by more than half in the last three years -- from 1,221 boxes to 563 boxes.

This removal of neighborhood mailboxes has been quietly under way for years: In 2008, Louisville, Kentucky, public radio station WFPL told its listeners that the Postal Service was doing away with a third of the city's 900 mailboxes.

Is this really necessary? Even if each mailbox is receiving fewer letters than it once did, there is something comforting about knowing they are there for when you need them. It's not like it costs anything extravagant to have them there -- they've already been built, installed and paid for. The postal workers are out on the streets anyway, collecting from other mailboxes; it's not as if they have to make wild detours.

You can understand the Postal Service's fiscal dilemma and still feel that something intangible yet vital is being lost as the corner mailboxes vanish. In a world that seems to increasingly conspire to make life less convenient, the ubiquitous mailboxes were a constant symbol of sustained convenience on a grand scale. They were seemingly everywhere -- they were meant to be taken for granted. They were a universal public service.

As Jones of the Chronicle put it, the mailboxes were "as common on the American streetscape as lampposts and ice cream trucks." She asked Nancy Pope of the Smithsonian Institution what the significance of the mailboxes were, and Pope explained: "Nothing says you're on an American street more than the blue mailbox. It's part of a neighborhood identity, it's reassurance, it represents our ability to communicate with one another. When you take this away, something is lost."

For all the complaints about the Postal Service, the real story has not been about letters that get misplaced or delayed, or about foul-ups in which mail is mangled or destroyed -- the real story, the daily miracle, is how the system has managed to work as smoothly as it has. When you stroll up to one of those corner mailboxes -- the 400,000 that existed in 1985 or the 160,000 that are hanging on today -- you seldom, as you drop your envelope into the box, are troubled by misgivings about whether it will make it to its destination. You take it on faith that it will.

So there's probably no way to stop the Postal Service from wrenching the mailboxes from the sidewalks and sending them on their way to mailbox heaven. But before they have all disappeared, it may be worth just a second or two to silently salute the system that, before anyone had even dreamed of the Internet, allowed Americans, for the cost of pocket change, to walk down to the corner, drop an envelope into the mouth of an iron box, and know that a federally authorized uniformed courier would hand deliver that envelope to any address in the United States.

Even if you've sort of neglected it in recent years as your eye has been enticed by flashy winking screens, you might want to give your reliable old neighborhood mailbox a friendly little pat on the shoulder next time you walk past it.

Before you know it, it may be gone.