Hug your children while you can 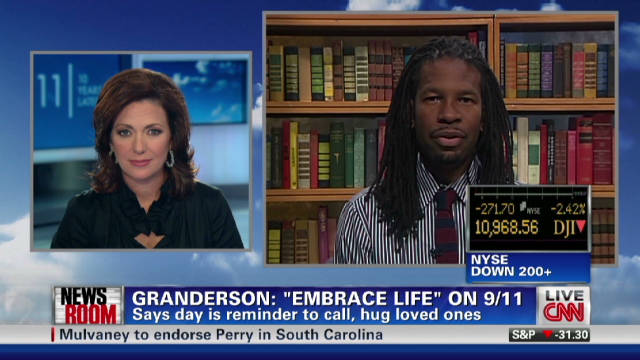 Editor's note: LZ Granderson, who writes a weekly column for CNN.com, has been named Journalist of the Year by the National Lesbian and Gay Journalists Association. He is a senior writer and columnist for ESPN The Magazine and ESPN.com and a 2010 nominee and the 2009 winner of the Gay and Lesbian Alliance Against Defamation award for online journalism. Follow him on Twitter at @locs_n_laughs. Watch him on CNN Newsroom Tuesdays at 9 a.m. ET.

It's the first day of school here in Michigan, and I know the Fennville couple are struggling to make it through.

You see, their son Wes was the young man who died of a heart attack just moments after hitting the game-winning shot for his high school basketball team in March.

The manner in which Wes died captured the nation's attention, and I helped cover the story for ESPN.

Wes should be starting his senior year.

Instead his family, his friends, his small town are left to mourn.

I've worked as a journalist for more than 15 years and have covered a fair share of stories involving unexplained, unfair tragedies -- like what happened to the Leonards -- and it never gets easier.

Just last month, I interviewed Charles Williams of Arkadelphia, Arkansas, who dropped his 15-year-old son, Montel, off for football practice and never saw him alive again.

Like Wes, Montel collapsed and died of an undiagnosed heart ailment.

"I didn't tell him I loved him or hugged him or anything," Charles said. "Now I won't ever get that chance again."

Sadly I hear some element of that phrase over and over again from mourners reflecting on words left unsaid, gestures not made. And even though we all understand in our heads that tomorrow is not guaranteed, it is so hard to live a life that illustrates that understanding in our hearts.

Over the next several days, our nation will spend a significant amount of time looking back at the morning of September 11, 2001, and how much that event changed us.

We will analyze the war on terror and relive accounts of that day from first responders.

Celebrities will talk about where they were when the towers were struck, experts will look at what we need to do to shore up our security and pundits will pontificate on whether the wars in Iraq and Afghanistan have really made us safer.

Undoubtedly, there will be moments in which it will feel like overkill, and I'm sure some of it will be. But I believe these are important stories to cover, important questions of morality to ask.

However in the midst of this 9/11 media avalanche, we should be careful not to overlook the most important lesson from the attack, and that is not to take life for granted. You never know which day is your last.

Simple gestures really, but I can tell you from experience that no matter how big or small the tragedy is, these simple gestures are what people in mourning want most -- one more phone call, a shared laugh, a kiss on the cheek.

To the cynic, this kind of talk is considered light and fluffy. But as someone who knows what it's like to hear the sobs of a father who had lost his only child the day before, there is nothing light or fluffy about a grieving heart.

As a nation, we can drive ourselves crazy this week obsessing over the events leading up to and immediately following 9/11.

We can take all of the precautions money and our military arsenal can buy in an effort to insulate ourselves from a world that seems to be filled with economic struggle and violent turmoil. But the reality is that death is a part of life no one can control. But we can say "I love you" to someone we care about pretty much whenever we want.

That may not seem like much, until it's the first day of school and you realize parents like the Leonards don't have that chance.

I'm not trying to be judgmental -- I certainly am guilty of taking life for granted as well -- but my hope is that for each moment we are reminded of the lives that were lost 10 years ago at the World Trade Center, the Pentagon and on United Flight 93, we take a moment to embrace the lives that are still here.

That we embrace the life that each of us are still fortunate enough to have.