By John Cary and Courtney E. Martin, Special to CNN 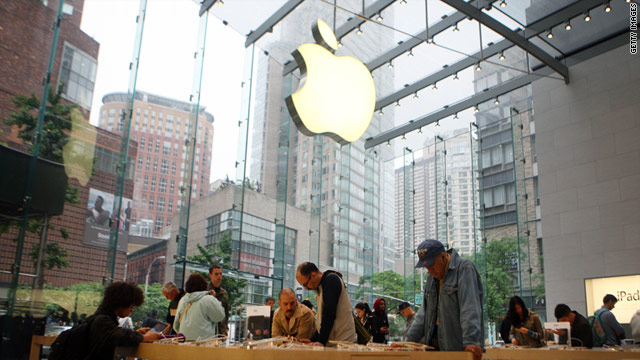 Customers browse inside an Apple Store in New York City in May.
STORY HIGHLIGHTS

Editor's note: John Cary is editor of PublicInterestDesign.org and author of "The Power of Pro Bono: 40 Stories about Design for the Public Good by Architects and Their Clients."Courtney E. Martin is co-author of "Project Rebirth: Survival and the Strength of the Human Spirit from 9/11 Survivors," among other books, and a TED speaker.

(CNN) -- As newly crowned CEO Tim Cook gets used to his new role and the extraordinary power and pressure that it brings, many Apple fans will likely urge him to continue leading the company much as his famous, turtle-necked predecessor Steve Jobs did.

After all, Jobs managed to create a brand synonymous with just about every technological advancement in recent years, as well as a hugely lucrative corporation.

Devoted Apple users ourselves, we, too, hope that much of the company's trademark culture stays the same. However, while Apple's design identity aligns with our lifestyles, its charitable identity -- or egregious lack thereof -- disappoints us. It's time for Apple to start innovating in philanthropy with the same ingenuity, rigor and public bravado that it has brought to its every other venture.

To this day, Apple has no publicized corporate giving strategy of any kind, aside from a "(RED)" edition iPod Nano, $25 iTunes gift card and new iPad cover -- through which some undisclosed percentage of profits ultimately goes to organizations fighting AIDS in Africa. According to the (RED) website, the proceeds from the sale of one iPod Nano "provides life saving medicine for one person in Africa for more than three weeks."

The campaign's founder, U2 frontman Bono, further disclosed Friday in a letter to the New York Times that Apple's (RED) line has amounted to "tens of millions of dollars that have transformed the lives of more than 2 million Africans through HIV testing, treatment and counseling."

That is a significant impact and sum of money, even over the five-year history of the campaign, but the latter is still minuscule in comparison to Apple's profits over that same period. Yet with virtually every other Apple product outperforming these two limited-edition (RED) items in terms of gross sales, this effort doesn't cut it, no matter how you slice it.

Apple is not publicly proactive about giving away a portion of its profits, but perhaps even worse, it actually inhibits consumers from giving to causes they care about via Apple gadgets. The company won't allow apps for donations and hasn't publicly said why, but there have been reports that it is concerned it would have to manage the funds and verify the legitimacy of the charities.

This is a company that manages to efficiently screen literally thousands of other developers and vendors via its App Store alone, not to mention facilitate countless financial transactions involving banks, credit cards and consumers every minute of the day. You'd think confirming that prospective app beneficiaries had 501(c)(3) nonprofit status wouldn't be out of reach.

When Jobs became CEO of Apple in 1997, he reportedly halted all philanthropic programs and said something to the effect of "let's wait until we are profitable."

The wait was officially over that same year, and the company's profits have grown at a tremendous rate. Last year alone, Apple recorded $14 billion in profits. And yet still, this great American company has no known strategy for investing a meaningful portion of its profits into social enterprise or nonprofit organizations.

Comparable companies, in the tech field alone, have certainly demonstrated charitable will -- if not always with perfect grace.

Google.org was launched in 2004 with $1 billion in startup funds, and though it has publicly stumbled in some efforts, such as a proposed system to track down fake drugs in developing countries that never got off the ground, at least Google is trying and giving.

Microsoft as a corporation has its own philanthropic ventures and investments, while the Bill & Melinda Gates Foundation's endowment, built from Microsoft profits today stands at nearly $37 billion. The Gates Foundation grants an average of nearly $1.5 billion annually. While the foundation and its practices have their critics, investor Warren Buffett saw fit to put his fortune in its hands.

Apple could start by following Google's lead in establishing something akin to Apple.org, an outlet for charitable giving or venture philanthropy, preferably avoiding some of the same challenges that have hindered Google.org. While it is imperative that Apple starts giving back some meaningful percentage of profits and letting people know about it, it would be even more commendable to see the company leveraging the same ingenuity it has brought to the music industry to micro-philanthropy.

Imagine the impact that Apple could have if it made donating to a deserving charity or cause as streamlined and habitual as downloading a song off iTunes. This is the even bigger opportunity for a company with such a loyal and impressionable consumer base -- to literally reinvent philanthropy and succeed where other well-intentioned efforts like Crowdrise, Facebook Causes, and Jumo have underwhelmed.

While others have publicly defended and taken aim at Jobs' philanthropy this week, our critiques and hopes expressed here sit squarely with Apple, not its co-founder. That said, one can't help but be moved by Bono's heartfelt statement, "I'm proud to know him; he's a poetic fellow, an artist, and a businessman...You don't have to be a friend of his to know what a private person he is or that he doesn't do things by halves."

With this landmark change in leadership, it would not only be strategic from a public relations perspective, but simply right on a moral level for Apple to create a robust philanthropic arm. The same company that revolutionized personal computing and has arguably done more to advance people's design expectations worldwide than any other entity has a chance at a legacy that outlasts battery life and warranties.