Look at the evidence: The stimulus worked

By Jared Bernstein, Special to CNN 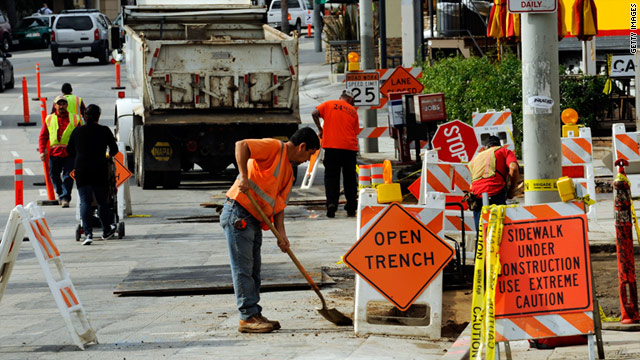 Editor's note: Jared Bernstein is a senior fellow at the Center on Budget and Policy Priorities. From 2009 to 2011, he was the chief economist and economic adviser to Vice President Joe Biden, executive director of the White House Task Force on the Middle Class and a member of President Barack Obama's economic team. He has been a senior economist and the director of the Living Standards Program at the Economic Policy Institute in Washington and held the post of deputy chief economist at the U.S. Department of Labor.

(CNN) -- As others have, and more will as the presidential election heats up, David Frum went after the Recovery Act on these pages. I'll address his critiques in a moment, but first let's just get this right out there: Though we can never know alternative histories -- in this case, how the economy would have performed absent the stimulus -- the weight of the evidence is that the Recovery Act did what we expected it to do.

It created a few million jobs and shaved a few percentage points off the unemployment rate. But most important, it kept a bad situation from getting a lot worse.

Lots of academic, nonpartisan evidence reveals the Recovery Act created or saved millions of jobs. The Congressional Budget Office, for example, just released a report finding that at its height about a year ago, the act created (taking the midrange of their estimates) around 2.5 million jobs, and shaved around 1.5 points off of the unemployment rate.

Again, that's what we expected in terms of unemployment reduction, though we clearly were too optimistic about the level of the jobless rate, in large part because we had not yet seen data on just how deep the unfolding downturn was.

One scholarly study by economists Alan Blinder and Mark Zandi that looked at the full spate of anti-recession initiatives -- not just the Recovery Act -- found that "the effects of the fiscal stimulus alone appear very substantial, raising 2010 real GDP by about 3.4%, holding the unemployment rate about 1.5 percentage points lower, and adding almost 2.7 million jobs to U.S. payrolls."

This type of evidence, which is very common among researchers who have examined the Recovery Act's impact, is clearly inconsistent with Frum's view that the act was a failure.

The first graph shows the growth in real gross domestic product, the broadest measure of economic growth, from 2007 up until the last quarter. The next picture shows job growth in both the total market and excluding government jobs over the same period.

While these are very simple pictures of fundamental economic variables, and while many moving parts influence such trends, they present remarkably compelling evidence against Frum's claims.

We see GDP growth, which was almost unprecedentedly negative -- down almost 9% in the quarter before the stimulus was passed -- immediately falling less quickly, and turning positive by mid-2009. Similarly, we see the same pattern in job growth, which also reversed course soon after passage, and broke zero -- net job growth -- in March 2010. The addition and subtraction of census workers that year distort the picture somewhat, but they're not included in the private sector data, which presents a clearer view of what happened.

The unemployment rate always lags growth by at least six months, but a few months after ARRA kicked in, it stopped growing.

The unemployment rate always lags growth by at least six months, and it continued to rise until peaking at 10.1% in October of 2009. Since then, it has come down a point, remaining far too high, but not growing.

But that's only half of what these simple graphs show. The other piece of information they yield is perhaps even more convincing. As the stimulus fades, the positive trends begin to falter: Both GDP and job growth slow significantly.

Again, there are lots of moving parts out there. But the fact that GDP and jobs almost immediately improve when the stimulus is coming on and then begin to slow when its measures are fading should lead objective readers to soundly reject the Republican talking point of "discredited stimulus measures."

Based on these data, Frum must be wrong, and here's why.

His first point, that the Obama administration just turned the crafting of the measure over to Congress, is simply inaccurate. I was there and we worked closely with Congress on the composition of the act. Yes, there was a lot of compromise, but there had to be in order to get the bill passed and get the medicine quickly into the system. And, in fact, the bill became law less than four weeks after President Obama took office.

That achievement, for which Vice President Biden gets a lot of credit, is all the more remarkable when you consider that even by then, the administration needed a supermajority to get anything passed. Frum's comments that every president should expect some obstruction don't begin to capture how high that bar has been for this president.

Frum's second point, that the administration failed to "mobilize the Federal Reserve" to support the stimulus is both strange and inaccurate. Strange, because, at least in my experience, the executive branch and the Fed itself aggressively protect the central bank's independence. For good reasons, Ben Bernanke and company don't take too well to outside "mobilization."

But it is also inaccurate in the sense that the monetary stimulus by the Federal Reserve to offset the Great Recession has been more extensive and aggressive than any other such actions in its history. According to analysis by the afore-mentioned Zandi, the Fed has thus far committed $2.2 trillion to offsetting the damage. That's almost three Recovery Acts.

Finally, Frum argues we bet all our chips on the Recovery Act, another flat inaccuracy. Again, with help from allies in Congress, we passed another round of the first-time homebuyers tax credit, two more extensions of unemployment benefits, a wage subsidy (HIRE Act), a small-business lending bill, a teacher preservation fund and a payroll tax holiday. Somewhere in there, we also helped to prevent the collapse of the U.S. auto industry.

Frum and others can argue that all of the above haven't made everything all better, but no conceivable monetary or fiscal stimulus could have fully offset the impact of a recession of this magnitude, particularly one with such highly leveraged banks and households at its root.

What they can't say, at least not without ignoring the evidence, is that the Recovery Act failed. It did what we expected it to do, creating jobs, lowering unemployment and preventing recession from morphing into depression. If anything, what the evidence shows is that it ended too soon. And that is why President Obama is, as we speak, crafting a smaller package of targeted jobs measures to build on the success of the Recovery Act.

Partisans thus need to put aside their talking points, absorb this evidence and get those measures to work in the economy as soon as possible.

The opinions expressed in this commentary are solely those of Jared Bernstein.