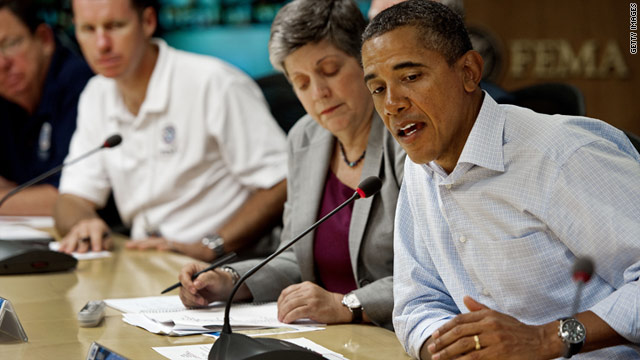 Editor's note: Julian E. Zelizer is a professor of history and public affairs at Princeton University. He is the author of "Jimmy Carter" (Times Books) and editor of a book assessing former President George W. Bush's administration, published by Princeton University Press.

Princeton, New Jersey (CNN) -- As Hurricane Irene gathered force, moving its way up toward the populated areas of the East Coast, politicians in both parties scrambled to prepare. President Obama cut short his vacation on Martha's Vineyard to return to Washington. Governors and mayors in all the affected states issued warnings, with mandatory and voluntary evacuations, and state officials mobilized.

Some presidents have been very effective at handling natural disasters. One of the famous cases took place with Hurricane Betsy in Louisiana in September 1965. Democratic Sen. Russell Long called the president to urge him to visit. When Lyndon Johnson hesitated because of his busy schedule, the canny Long said: "If you go there right now, Mr. President, they couldn't beat you if Eisenhower ran!"

Johnson, motivated by a mix of humanitarian and political incentives, went right away. He traveled the streets, talking to residents and inspecting the damage. Johnson leaned on Robert Phillips from the Office of Emergency Planning to take quick action and to do what was necessary to provide relief.

During one phone conversation, with Long on the line, he said: "Now, in times of distress, it's necessary that all the members of the family get together and lay aside any individual problems they have or any personal grievances and try to take care of the sick mother, and we've got a sick mother on our hands. And as I said the other night when I was there, we've got to cut out all the red tape. We've got to work around the clock. We've got to ignore hours."

Relief arrived, and Congress also passed the Flood Control Act of 1965, which helped to rebuild the area.

Other presidents have not done as well. President George H.W. Bush famously stalled in providing relief to Florida after Hurricane Andrew in 1992. Following the devastating storm that ripped through the region, Bush did declare a state of emergency and promised that help was on the way. But the help did not come for days.

Indeed, Bush was not even aware at first of the full extent of the damage.

One frustrated emergency official in Dade County asked, on national television, "Where in the hell is the cavalry on this one?" When government assistance finally arrived, many Floridians were angry and frustrated, blaming the president personally for what had happened. The laggard response cost him approval ratings going into the election.

But the event that looms largest in political circles is Hurricane Katrina. In late August 2005, the hurricane devastated Louisiana and Mississippi. President George W. Bush, who had handled 9/11 with such masterful political effect, stumbled. The Federal Emergency Management Agency, under the direction of Michael Brown, who many felt was not qualified for the position, had immense trouble overseeing the response.

The contrast to President Bill Clinton, who had effectively used FEMA to deal with a series of hurricanes, made the situation even more embarrassing. The suffering that took place in New Orleans was immense, and it was broadcast on national television.

iReporters have their eyes on Irene

The problems in the post-Katrina moment raised questions about President Bush -- his ability to govern, his competence and about cronyism -- that lingered for years. Given the high percentage of African-Americans living in the city, the weak response weakened the president's claim to be a "compassionate conservative" who reached out to minorities. While many people blame the war in Iraq or controversial counterterrorism policies for Bush's downfall, Katrina was an equally important turning point.

Obama suffered early in his presidency with the slow and halting response to the oil spill in the Gulf Coast. While he recovered as the cleanup took place, the crisis was one of the first events to raise questions about how much better Obama was doing with some problems such as the environment than his predecessor.

Coming at a low point in his presidency, the aftermath of Hurricane Irene will be even more important. Obama can't afford to have any more situations that raise questions about his skill as a leader.

The challenge extends to others as well, including potential presidential candidates New York Gov. Andrew Cuomo and New Jersey Gov. Chris Christie. When Christie was at Disney World during a massive snowstorm earlier this year, the media was unrelenting in its criticism. This time, Christie told state residents to "get the hell off the beach."

Congressional Republicans will also be in the spotlight. House Majority Leader Eric Cantor's remark that the GOP would increase funding only if other spending cuts were made will sound harsh to many Americans -- and not exactly like a model of how to govern in times of crisis.

Natural disasters hurt all Americans -- rich and poor, black, white and Latino, male and female. Therefore, they are one of the few times when many Americans -- red and blue -- tend to turn to government for help and put aside their political biases.

How leaders respond to these crises, particularly after Katrina, can determine how the public sees them in the years to come.

The current crop of executives must show in that they can effectively manage through the post-emergency period, mobilizing and distributing resources so that Americans can rebuild their lives quickly. Rather than sparking more fear, they must also inspire those who are suffering to regain the confidence they need to move forward.

If they don't, as President George W. Bush learned, their failure will come back to haunt them in the court of public opinion.