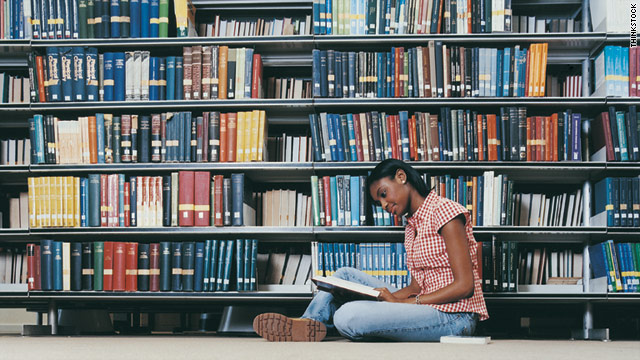 Don't ignore the wealth of books that are open to you at a local library, says Bob Greene.
STORY HIGHLIGHTS

It's one of those things most of us seldom pause to think about. After all, much of the news about the book publishing business has been kind of grim lately. The Borders bookstore chain is shutting down, thus erasing from the American scene more than 600 big, often beautiful, book-crammed edifices, perfect for wandering around and browsing. The digital revolution, as exciting as it is, has made the publishing industry exceedingly nervous about the economics of its enterprise, and about what will become of traditional books, the ones printed on paper and bound between covers. Stand-alone book review sections in newspapers have, with a few exceptions, all but disappeared.

So what, exactly, is there to be cheery about if you're a book lover?

Just this: There are so many wonderful books that have been written over the centuries, books that will thrill you and make you cry and change you and bring laughter to you and keep you up all night. Even if you did nothing else for the rest of your life but read, you would only be able to get to the most infinitesimal percentage of books that you would be destined to adore. They're just waiting for you -- waiting to be found, right now.

And in most cases, even in these rugged and scary economic times, they're free.

"The serendipity, the discovery inherent in finding books on a public library shelf," Molly Raphael, president of the American Library Association, was saying to me the other afternoon. "The act of walking alongside a shelf of books with their spines facing out toward you, and reaching for one and starting to look through it...."

The cult and culture of newness in our society has made us too willing to believe that "new" automatically equates to "good." A book that was stirring and lovely when it was written -- whether 15 years ago or 60 years ago or 150 years ago -- does not lose its power just because it sits on a library shelf for decades at a time with no one pulling it out. The great majority of books in any city or small-town public library are not currently being discussed on television or radio talk shows; the authors are not on tour. But, years ago, someone decided for a reason that those books were meant to be bound between hard covers. The reason was that the writing inside was intended to last.

The cult and culture of newness in our society has made us too willing to believe that "new" automatically equates to "good."
--Bob Greene
RELATED TOPICS

And the pleasure, for us, is in finding them and bringing them home. I've been reading a lot of older books lately, and the passage of time diminishes the joy not at all.

A few of them: "Cast of Characters," a novel by Al Morgan, published in 1957, about the interconnecting lives and stories of a small group of people, both famous and obscure, whose paths cross at the premiere of a run-of-the-mill Hollywood movie. "No Orchids for Miss Blandish," by James Hadley Chase, published in 1939, a crime novel so uncompromisingly tough and stark that it makes the work of Dashiell Hammett and Raymond Chandler at times seem almost timid. "The Golden Ham," by Jim Bishop, published in 1956, a you-are-there, moment-by-moment, fly-on-the-wall narrative biography of Jackie Gleason at the instant the new medium of television was making Gleason celebrated in a way people in the pre-TV era could not have comprehended.

Public libraries themselves are facing difficult times. They're losing funds and cutting hours, or even entire days; budgets for purchasing new books are being slashed; staff is being laid off.

But the glory of the American public library system remains. Use of a library is complimentary for all who wish to come in. A library card is in almost all cases absolutely free. You can search for books yourself, or you can ask for, and receive, the expert help of a librarian. There are, according to figures provided by the ALA, 9,221 public libraries in the U.S. If you add to that libraries on college campuses, in schools, in armed forces and specialized facilities and in government buildings, the number becomes 122,101.

Dorothy Rabinowitz of the Wall Street Journal selects the writer each week for a terrific column called "Five Best." The premise is simple: One man or woman who is an expert in a given field is asked to recommend and write brief reviews of five books he or she loves that were published any time in history. The column turns that culture of newness, of hotness, on its head, with great results. Readers of the column, Rabinowitz told me, eagerly seek out the books in libraries or in used bookstores. She said that she tells each week's writer of the column not to worry whether or not readers have ever heard of the books; she instructs them: "The more obscure, the better."

No one can predict with certainty what is going to become of the book business in the century ahead of us. But there is something about life that all of us, in the back of our minds, know is true: The best and most unforgettable moments have a way of blindsiding us, of appearing as if by magic when we aren't even looking for them. So it is with books. They're out there, on library shelves in the town where you are reading these words. Some haven't had their covers opened in years, or been carried out the front door of the library. Maybe you and one of them were meant for each other. It's summer. What have you got to lose?