America, how can Muslim-Americans reach non-Muslims?

By Dean Obeidallah, Special to CNN 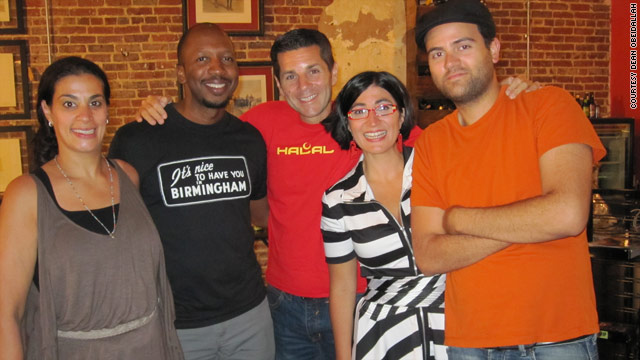 Editor's note: Dean Obeidallah is an award-winning comedian who has appeared on TV shows such as Comedy Central's "Axis of Evil" special, ABC's "The View," CNN's "What the Week" and HLN's "The Joy Behar Show." He is executive producer of the annual New York Arab-American Comedy Festival and the Amman Stand Up Comedy Festival.

(CNN) -- A group of Muslims recently traveled to the Deep South. Were they met with ...

I just returned to New York after an eye-opening, exhausting and inspiring two weeks traveling across the American South with the stand-up comedy tour "The Muslims Are Coming." We performed in Alabama, Georgia, Florida, Mississippi and Tennessee and plan to travel to the Midwest in the fall for more shows.

The tour, which I co-produced with comedian Negin Farsad, is being filmed for a documentary and also features comedians Maysoon Zayid, Omar Elba and some special guest Christian and Jewish comedians. This project is being funded by our friends and families, not any organizations.

To us, this tour is not about Islam, it's about America. We are exploring the question: What type of country do we want? One where minority religions are harassed, persecuted and given less freedom simply because of their faith, or a nation where all religions are treated equally?

We fear that the next generation of American-Muslims will be born into a country where they are considered less than American.

So we headed out on our "laughing and listening" tour, which was unlike any comedy event I have ever been a part of before.

First, all the shows were free, because we wanted to reach out to people outside our community.

Second, we had an express activist goal: to meet with people, American to American, in hopes of countering anti-Muslim sentiment. We held a Q&A at the end of each show, turning the show into a town-hall meeting.

During the day, we set up "Ask a Muslim" booths on the streets in communities where we performed to meet even more people. We even held a "Bowling With Muslims" event. We continually urged people to ask us the "tough" questions, such as about Sharia law, since the only way to counter misconceptions is head-on.

What did we learn from this tour of the South? I personally learned that I enjoy shooting guns in an indoor shooting range and eating at the Waffle House. (Seriously.)

But more importantly, we learned that overwhelmingly Americans are not just tolerant but supportive of equal rights for all Americans when it comes to freedom of religion.

Now, I'm not saying that everyone we met loves Muslims. In a nation of more than 300 million people, there will always be a small percentage who hate minorities, whether over religion, ethnicity or sexual orientation. But there's a difference between not liking a group of Americans and advocating discrimination against them.

It was truly inspiring to see so many people of different races, religions and ethnicities coming out to meet with us in city after city.

We saw this in Gainesville, Florida, home of the "Koran burner" Terry Jones, where 300-plus people, mostly Christians and Jews, attended our show, voicing their opposition to hate.

And in Murfreesboro, Tennessee, where an ugly mosque controversy led to the fire bombing of construction equipment by mosque opponents and, sadly, death threats directed at leaders of the Muslim community. There, more than 450 Christians, Jews, Muslims and even atheists attended our show as a sign of unity.

We heard in Lilburn, Georgia, from a Christian minister who passionately explained that if Americans don't stand up for Muslim-Americans' right to worship today, in the future, some might try to deprive these same rights to minority sects within Christianity or Judaism.

But we also heard something unexpected. In state after state, people said that they did not think American-Muslims were doing enough to denounce terrorists and radicals who claim they're acting in the name of Islam.

I was shocked to hear this so often. Ten years after 9/11, with Muslims elected to the U.S. Congress and serving as judges, teachers, newscasters, etc., I thought that understanding was a given. I assumed our fellow Americans knew that we despise the terrorists who are Muslim as much as they do, if not more so, because our community has suffered a backlash due to the horrific acts of these people. (We also hate terrorists who claim to be motivated by Christianity or Judaism, but we don't hold everyone in those religions responsible for the actions of a few.)

Despite all the press events and appearances in the media by American-Muslims denouncing terrorism, it's clear that this message is not reaching its intended audience.

We then began asking people: What should we be doing to make this point?

A civil rights leader in Birmingham, Alabama, suggested that, based on his own experiences, we should be working to build more allies outside our community, like African-Americans did in the 1960s in enlisting the help of white Americans in their quest for equal rights.

Others suggested that we try to appear in the media more and raise this issue -- which we would love to do assuming the media are receptive.

If there were more than 2% of us in the U.S. population, I would suggest we assign a Muslim to each person to answer questions. Or maybe we can have an "Adopt a Muslim" program. But we don't have the numbers.

So we are now turning to you, American to American: What can we do to reach out to non-Muslims to build bridges and dispel stereotypes?

We are sincerely open to hearing your suggestions.