A tale of two Texans: Perry vs. Bush 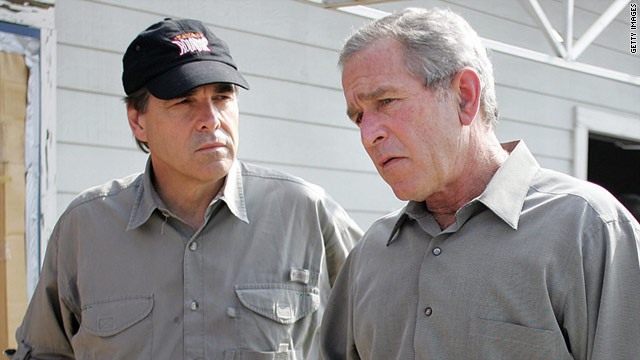 Austin, Texas (CNN) -- If Rick Perry and George W. Bush had been born in the same family, W would have become known to friends as "the smart one."

Perry is not W. That's the simplest statement about the two Texans. But there is subtlety and confusion abounding in the comparison, which is probably best articulated by Dale Berra, former professional baseball player and son of the Yankee great Yogi, who was once asked to compare himself to his famous father. "When it comes to my dad and me," he said, "our similarities are different."

The aesthetics, at least, with Perry and Bush are almost identical. Watch Perry walk. He holds his arms at his sides just like the former president and appears uncertain of what to do with his hands. This is not an altogether bad thing, however, because when his hands get busy signing bills in Texas, poor children lose health care, 100,000 teachers could stand to lose their jobs, and tens of thousands of families stand in line in a scorching summer to get school supplies and fresh fruit and vegetables at a Houston handout. Let us urge the Texas governor to keep his hands idle.

Perry also likes to affect the boots and suits couture that is a part of Texas politics. Bush had a similar style, and even though many Texans viewed him as an East Coast "outlander," he appeared far less the poseur than Perry. In Iowa, the current governor lifted his leg, put his boot on a hay bale and threw his knee back to make sure his boots (or something) were clearly visible to onlookers. In spite of the fact that Perry was raised by cotton growers on the South Plains in West Texas, W effortlessly out-Texans him.

James Moore: Why Perry is headed to the White House

They both, however, have had to work hard at conveying the image. Macho Texas is still seeking psychological counseling trying to reconcile the fact that its two most popular governors in the modern era were cheerleaders. Bush first learned to hold the bullhorn to his mouth at Andover, and Perry, who prefers the term "yell leader," rallied the cadets at Texas A&M. (No one has yet adequately explained how America can elect cheerleaders to the position of national quarterback.)

Politically, though, their similarities could not be more different.

When Bush came to Austin, he held private meetings with each of the 181 state senators and representatives from both parties. He asked them what their legislative agenda included, shared what was on his radar and discussed how they might work together. An astonishing notion, cooperation, but in politics common sense often passes for genius.

Perry, though, was having none of that stinking compromise and kumbaya business. A coalition of hard-right conservatives had taken control of the Legislature, and they weren't interested in a governor who cut deals. But they didn't have to push Perry to the right-hand edge of their flat earth; he bravely led them.

W famously styled his politics with the brand of "compassionate conservatism." Perry's is more like kick-ass conservatism.

Bush might have contemplated reductions in health care for budget cuts and forced up your property taxes with a legislative shell game, but he would have at least felt bad about it. Perry would tell you either not to get sick or make enough money to buy your own damned health care and shut up and pay your property taxes because we need you to underwrite all the tax breaks we give corporations coming to Texas because they are going to make campaign donations.

The essential distinction between these two men is that Bush pushed ideas and policies that he didn't believe in and were politically expedient, but Perry believes the radical ideas driving the tea party movement and thinks compromise is a kind of terminal cancer.

When W was preparing his run for the White House from Texas, Karl Rove was trumpeting the idea of a Defense of Marriage Act, which was a linguistic head fake to ban same-sex marriage. Bush didn't like the idea. A longtime staffer and close policy adviser was gay, and Bush accepted homosexuality as a consequence of biology. When I asked him how he could support such a ban, Bush said quietly, "It's just politics." The Rove tactic was to motivate fundamentalist conservatives, and it worked.

Political strategy for Bush, however, is religious dogma for Perry. A devout fervor informs Perry's resistance to same-sex marriage, as if he had just wandered a desert for 40 years and had been handed the dictate against it on a tablet of stone from a bearded man.

What do you think of the presidential candidates?

In the GOP primary process, presidential candidates have always been expected to yak about issues that are never relevant in the general election. The people voting in primaries are motivated by principle and passion and extreme conservatism (even though many of them probably go home after voting and watch reruns of "Family Guy" with the curtains closed). These are Perry's people, not Bush's. They made W uncomfortable. They make Perry happy, which is why, when legislators were called back into emergency session to figure out how to cover a $27 billion budget gap and save schools, the first item the Texas governor made them confront was an "emergency" law to make sonograms mandatory for women considering an abortion. (He got around to cutting $4 billion from education, potentially forcing the firing of almost 100,000 teachers a little later in the day, after a brisk jog and lunch.)

Perry thinks of W as a country club Republican, a politician too willing to work out deals. Bush doesn't think of Perry much at all. The people who want Jesus as a screensaver on every computer in public schools, call women who have had abortions "baby killers," think that being a homosexual is a "lifestyle choice," and are convinced that humans once saddled up and rode west on dinosaurs; these people all made Bush uncomfortable. But Perry loves them. He shares many of their beliefs. They helped elect him governor.

The opinions expressed in this commentary are solely those of James C. Moore.