By Meg Urry, Special to CNN 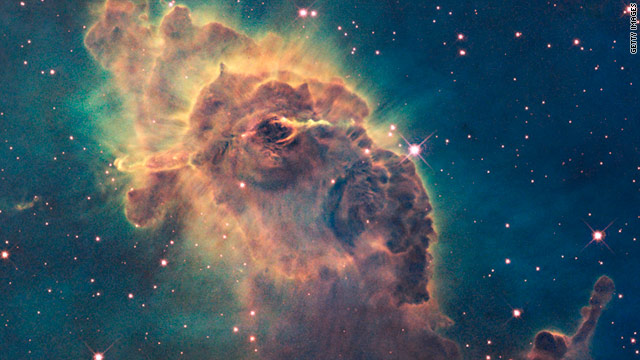 The Hubble Space Telescope provided an image of a stellar jet in the Carina Nebula.
STORY HIGHLIGHTS
RELATED TOPICS

Editor's note: Meg Urry is the Israel Munson professor of physics and astronomy and chair of the Department of Physics at Yale University. She is also the director of the Yale Center for Astronomy and Astrophysics.

New Haven, Connecticut (CNN) -- Astronomers just discovered the largest reservoir of water ever, roughly 140 trillion times the volume of the Earth's oceans. With severe drought afflicting Africa, Asia and the southern United States, you might ask whether this offers a solution to earthly afflictions.

Alas, it is in the very distant universe, roughly 12 billion light years from Earth. So even moving at light speed (NASA's fastest spacecraft move about 20,000 times slower), it would take humans several trillion lifetimes to reach this water blob, never mind bringing it home -- definitely too far for a quick trip to the well.

But it's worth taking a deeper look. The newly discovered water can teach us about the universe when it was only a fraction of its present age.

At this point, you're probably asking why this kind of history is important to us earthlings today. And maybe you're wondering what kind of time travel is involved.

Seeing into the past turns out to be no big thing for astronomers. Light coming from very distant objects takes time to reach us -- in this case, 12 billion years, according to the details on the water discovery from NASA's Jet Propulsion Laboratory.

By the way, scientists don't refer to this reservoir as a civilian might, such as Lake NASA. We call it a mega-maser. A maser is a collection of molecules -- in this case, water -- that amplifies light into a powerful beam. It's basically the same thing as a laser beam, the more familiar light beams, often red or green, used for surgery or to point at a PowerPoint presentation.

In the case of this mega-maser, the light was emitted when the universe was very young -- about 10% of its current age. The water exists as huge gaseous clouds that absorb and emit light, allowing powerful telescopes to detect them across the mind-boggling distances of space. That we live 13.7 billion years after the big bang origin of our universe is one of the most remarkable discoveries of the past decade.

Looking at very distant masers or galaxies is like looking at a photograph taken ages ago. For this new mega-maser, the light captured in today's photo was emitted 12 billion years ago. Pseudo-time travel like this happens every day, with pictures taken by the Hubble Space Telescope, the mammoth Keck telescopes in Hawaii and the Chandra X-ray Observatory satellite to name just a few.

If that doesn't boggle your mind, how about this: The newly discovered mega-maser orbits a very massive black hole, and precision measurements of its trajectory can tell us very precisely the size of that black hole and perhaps its geometry and how it accumulates its bulk.

We don't have that kind of huge black hole nearby -- fortunately for us -- so we can't grab a sample to study. But from just a few stray bits of light, captured in this case by the Caltech Submillimeter Observatory in Hawaii, we can figure out the big picture.

Let me give you an example.

As far as physicists can tell, the laws governing physics on Earth -- basically, mathematical equations that describe the strength of the pull of gravity or the force between subatomic particles -- are the same throughout the universe. But watching the mega-maser respond to the gravity of its host black hole means we can actually measure whether gravity is the same on the other side of the universe.

By studying the size and temperature of the mega-maser itself, we can try to understand how it formed. Maybe it won't fix droughts on Earth but understanding the laws of nature nonetheless gives us a terrestrial tool kit.

This is because the most fundamental research -- research that doesn't have an obvious application to our daily lives -- often turns out to be immensely important down the line. For example, discoveries made about atoms a century ago and the development of the theory of quantum mechanics to explain those discoveries, led to our present-day boom in electronics, computers and data storage. That in turn fuels the present economy, right here, right now.

Those machines the doctor uses when you visit? CAT scanners, MRI imagers, laser surgical tools and much more -- they're based on fundamental laws of physics. I'd guess few of the original researchers realized, as they were trying to figure out how nature works, that their discoveries would have important practical applications.

In truth, they probably weren't even motivated by the possibility of practical applications -- they simply cared about understanding the world around us. Only later did other scientists and engineers turn those discoveries into essential tools for today's world.

That's why scientists pursue fundamental knowledge for its own sake -- whether they understand right away "what it's good for" or not. You never know when a deep physics concept will turn into a vital solution.

Knowledge about the larger world we live in, from planet Earth to the Milky Way galaxy to the universe itself, is the ultimate human legacy. With our small brains, we build telescopes to explore the distant reaches of the universe, we deduce its structures and understand its physical laws and we pass that knowledge on to subsequent generations.

Like a lot of cosmic science, the payoff isn't immediate -- but it lasts forever.

The opinions in this commentary are solely those of Meg Urry.