By Brad Todd, Special to CNN 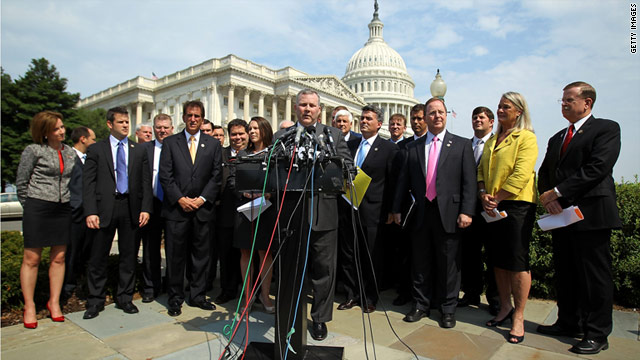 Freshman members of the House at a news conference Thursday to show their support for Speaker Boehner's debt-limit plan.
STORY HIGHLIGHTS
RELATED TOPICS

Washington (CNN) -- Hardly a day goes by without dismissive and arrogant invective from the White House about the House Republican Conference and its alleged fear of, or fealty to, "the tea party." Too many Fourth Estaters have lazily bought the line and played along with President Obama's spaghetti western construct. That's not the right explanation for this drama.

Instead, we should look east, across the pond, for an explanation. The House of Representatives post-2010 is built more like a European parliament. I know the irony is too delicious for all you apologizing Europhiles on the left, but hang with me for a few more paragraphs.

The 240-seat Republican Conference delivered by the American public last November is functioning more like a two-part governing coalition than a political party. But it's not two parties -- that would imply the tea party is an actual organization, which it's not, any more than the anti-war netroots movement of the last decade was. In fact, there's hardly a hair's breadth of ideological division within the whole group. The differences lie instead in their tactical approaches and their self-identification.

Somewhere between 100 and 150 Republican members -- a majority of the conference on a given day -- self-identify as both outsiders and conservatives. They won in 2010 by saying "Washington's broken and both parties are to blame" just as often as they said "Obama and Pelosi are too liberal." This was not just campaign strategy; it was conviction. They believe both statements earnestly and equally, and in 2010, the voters did, too -- a fact conveniently ignored by too many in this town.

As a result, it's going to be darned difficult to get unanimity among House Republicans, even behind conservative legislation. It takes 218 votes to pass anything in the House. Plenty of Republicans are wary of being in any group of 218, no matter which 218 it is -- solely for fear of what being herded might say about them.

Conversely, the House Democrats now have both ideological and tactical hegemony, as minorities often do. What little dissonance ever existed in the Democratic Caucus was extinguished almost entirely by the voters in the last election, with an assist from a tone-deaf former House speaker, Nancy Pelosi. If you don't believe it, just ask ex-Blue Dog Reps. Gene Taylor and Travis Childers, and hosts of others who faced the music and lost their races last November.

Don't look for a solution to this debt issue -- or any issue -- that unites half the Democrats and half the Republicans. The ideological chasm is just too great for that at this point in our history. If you want to know what can pass, look at what can unite the GOP coalition -- something that is conservative and rebukes Washington's modus operandi at the same time. There's probably no other path in this Congress, and even getting that will not be easy.

The GOP leadership will always face a high hurdle to win the support of the "outsider" half of its membership. If this frustrates you as a political observer, don't blame the new congressmen; blame the pesky voters who sent them. It is a representative body, after all.

The opinions expressed in this commentary are solely those of Brad Todd.