Amy Winehouse and the British tabloids

By Paul Willis, Special to CNN 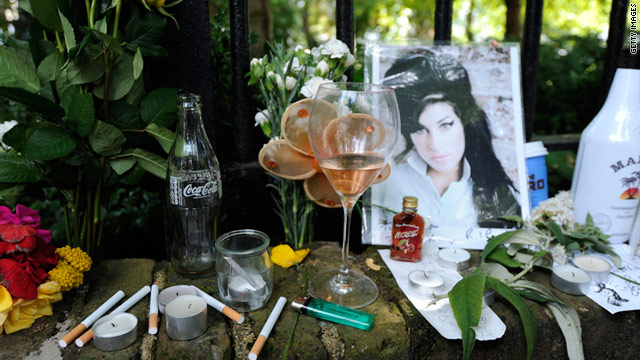 Cigarettes, alcohol and flowers are among the items left in front of Amy Winehouse's London home, where her body was found.
STORY HIGHLIGHTS
RELATED TOPICS

Editor's note: Paul Willis is a British journalist and has written about culture, current affairs and the media for The Guardian, The Sydney Morning Herald, San Francisco Chronicle and London's Media Magazine

New York (CNN) -- The discovery of Amy Winehouse's body at her London home gave Rupert Murdoch and his clan a brief respite from an avalanche of bad press, supplanting the phone-hacking scandal that had remained the lead story for weeks in British newspapers and TV shows.

It is somewhat ironic that Winehouse's death inadvertently took some of the heat off News International, the British arm of the mogul's media business: The troubled star was frequently a target of the tabloid culture that Murdoch helped to foster. Her battle with her private demons was very public, detailed in a nearly constant stream of lurid tales in the tabloids. The Murdoch-owned Sun newspaper, for example, published images in 2008 of Winehouse smoking from a glass pipe alongside the headline "Amy Winehouse on crack," with a story claiming the singer had ingested a cocktail of drugs that included crack cocaine during a house party.

But the British tabloids' casual intrusiveness into the personal lives of the famous must be re-evaluated after the firestorm of revelations about News International's news-gathering methods. The scandal began with the egregious story that a private investigator in the pay of the company had hacked the cell phone of a murdered schoolgirl. Up to this point, tabloids seemed to have regarded this predatory intrusiveness as a moral right.

British Prime Minister David Cameron has announced a judge-led and wide-ranging inquiry into the phone hacking that could well result in recommendations for a change in the law. At the very least, the inquiry is likely to come up with proposals on press regulations -- and it's a fair guess that those proposals will deal in one way or another with what constitutes "in the public interest," the argument defending choices of topics of news stories in Britain.

British newspapers have had an easy ride publishing details of celebrities' private lives, with the defense that a subject's high profile makes whatever he or she does in the public interest. The glitch, however, is that the decision about what constitutes the public interest is adjudicated by a watchdog group dominated by newspaper editors and journalists, who have their own reasons for keeping the definition of that term as broad as possible. Critics of the regulatory system insist this cozy relationship is one of the reasons the tabloid press in Britain has been allowed to get so out of hand.

Another factor behind the tabloids' often outrageous behavior is the nearly insatiable appetite in Britain for celebrity scandal. It is not a new thing. As far back as the mid-19th century, rumor and gossip circulating about the aristocrat and Romantic poet Lord Byron prompted the politician Thomas Macaulay to note in exasperation: "We know no spectacle so ridiculous as the British public in one of its periodical fits of morality."

The best-known recent example was the tabloid obsession with Princess Diana. By the time of her death in 1997, the late Princess of Wales was in the UK papers nearly every day -- the minutiae of her life, loves and footwear choices scrutinized ad nauseam. Her death was met with public outrage at the paparazzi, blamed by many for the car crash that killed her, and contempt for the tabloids. After briefly toning it down in the aftermath, the tabloids went back to their aggressive coverage of public figures.

Her musical ability was matched only by her talent for self-destruction. All this made her perfect fodder for the tabloids.
--Paul Willis

Winehouse is the latest victim of this pernicious culture of sensationalism. A worldwide star whose biggest hit was a song about not wanting to go into rehab, her musical ability was matched only by her talent for self-destruction. All this made her perfect fodder for the tabloids. It was a point she appeared to acknowledge in a lyric in her 2007 Grammy-award winning album, "Back to Black," where she sang: "I told you I was trouble/You know that I'm no good."

Many of the tracks on that album were written about her relationship with her ex-husband Blake Fielder-Civil, a man who seemed tailor-made for the role of stock villain in the cartoonish version of reality that dominates the tabloid press.

It is important not to overstate the role of the media in the tragedy of Winehouse's death -- the singer's troubles ran far deeper than some hostile column inches. Even so, the papers' bad-taste documenting of her downward spiral bordered on cruelty. Tabloids trumpeted disturbing photographs of Winehouse stumbling barefoot through the London streets, bloodied and disoriented, dressed in tatters. Columnists wrung their hands in false concern at the plight of "poor Amy," even as their editors turned the star's descent into a gruesome public spectacle.

It is too early to know how much of an effect the phone-hacking scandal will have upon the tabloid culture; the decline in the sales of newspapers may, in the end, make it a moot point. Yet the very real shock felt in Britain over these two major stories may convince enough people that gawping at the sad lives of troubled people, by any means possible, does no one much good in the long run.

The opinions in this commentary are solely those of Paul Willis.