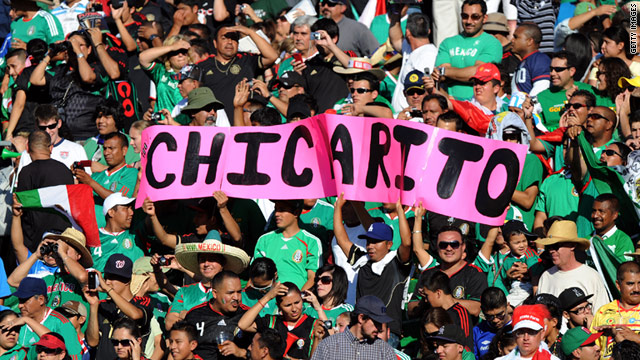 Fans of Mexico hold a banner for player Javier "Chicharito" Hernandez at the U.S.-Mexico soccer match at the Rose Bowl.
STORY HIGHLIGHTS

San Diego, California (CNN) -- Let's face it. Most Americans couldn't care less about soccer. Until, that is, a group of foreign nationals who presumably live in this country boo the U.S. team, disrespect the national anthem, and wave the flag of the nation they left behind. Then we care a whole lot.

Deal me in on that. On most days, I describe myself as a Mexican-American. I especially feel that way when confronting intolerance and discrimination against Mexicans. It's nothing new. A few years ago, a reader wrote to tell me that, as an Italian-American, he felt "more Italian" when he faced discrimination growing up.

That said, today, I'm feeling more like an American-Mexican. What did it, for me, is something that should be considered an unfortunate side effect to World Cup fever: The ugly nationalism that the games sometimes bring out in fans with divided loyalties. Or, in some cases, misplaced ones.

Consider what happened a few weeks ago when the U.S. soccer team played Mexico at the Rose Bowl in Pasadena, California. Technically, it was a home game, but, to the team, it must have felt like an away game ... far, far away.

Some journalists who were there to cover the event described the scene. But no one did it better than Los Angeles Times columnist Bill Plaschke.

He wrote: "On a balmy early Saturday summer evening, the U.S soccer team played for a prestigious championship in a U.S. stadium ... and was smothered in boos.

"Its fans were vastly outnumbered. Its goalkeeper was bathed in a chanted obscenity. Even its national anthem was filled with the blowing of air horns and bouncing of beach balls. Most of these hostile visitors didn't live in another country. Most, in fact, were not visitors at all, many of them being U.S. residents whose lives are here but whose sporting souls remain elsewhere."

The official attendance was 93,420. Plaschke estimated that at least 80,000 rooted for the Mexican team.

One of them was 37-year-old Victor Sanchez, who wore a Mexico jersey and told Plaschke: "I love this country, it has given me everything that I have, and I'm proud to be part of it. But yet, I didn't have a choice to come here, I was born in Mexico, and that is where my heart will always be."

Previous waves of immigrants -- from Germany, Ireland, Italy and other countries -- might have had similar feelings. They loved the United States, and yet some of them kept a warm spot in their heart for the old country. Still, by most accounts, their loyalty was clear. They pledged allegiance to the nation that took them in.

Sanchez might not have had a choice to come here -- either because he was brought here as a child by his parents or because the poor economy in Mexico made it impractical for him to stay. But he has a choice now. He can stay here, or he can go back. If he stays, he ought to try to be more grateful to a country that has given him "everything" that he has. It's immigrant etiquette. Good manners intertwined with good citizenship. Were he to choose to go back to Mexico, he could cheer for whatever team he wanted.

When Mexico's team came from behind and defeated the Americans, 4-2, the crowd went wild. And when, in defeat, the U.S. team was recognized one last time, there were more boos.

Sanchez told Plaschke: "We're not booing the country, we're booing the team. There is a big difference."

The Mexican fans understand perfectly. After all, they weren't just cheering a team; they were showing their love for Mexico. The team represents the country.

As a Mexican-American -- oops, I mean, an American-Mexican, spectacles like this turn my stomach.

I wouldn't go as far as those on the cultural right who worry that we're witnessing an invasion, an erosion of American culture and a threat to our national identity. That's nonsense. Check with me in 10 years when the children of those Mexican soccer fans are watching English-language television and listening to pop music on the latest gadget.

It could be a phase, perhaps brought on by the anti-immigrant mood infecting much of the United States. And, if so, let's hope it is a short one.