Why Greeks are angry, scared -- and trapped

By William Antholis, Special to CNN 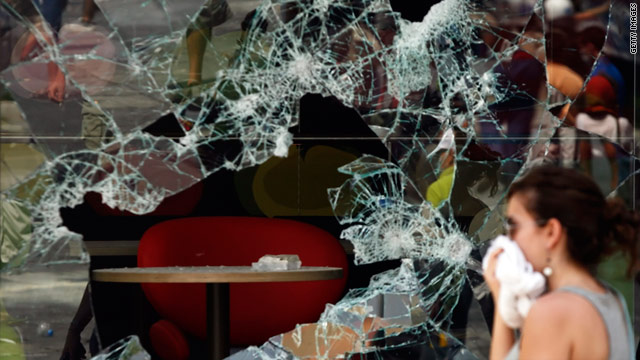 The push for austerity measures has led to clashes between police and protesters in Athens, leaving a trail of shattered glass.
STORY HIGHLIGHTS

Editor's note: William Antholis, managing director of the Brookings Institution and a senior fellow in Governance Studies, has traveled extensively in Greece.

(CNN) -- The near-tragedy unfolding on the streets of Athens could be a comedy, if the possible consequences were not so dire.

With Europe pushing austerity measures on Greece in exchange for another round of bailouts, the Greek public in the streets responds with chants: "We won't pay." Faced with pain and suffering, they are contemplating suicide.

It is almost as if the script was lifted from Mel Brooks' film "Blazing Saddles." Cleavon Little's character faces a gun-wielding mob about to run him out of town -- or worse. To escape, he puts his gun to his own head and threatens to shoot unless members of the mob drop their guns first.

In this case, Europe is tired of bailing out Greece, having already done so once. In the Netherlands and Finland, nationalist parties have even called for Greece to leave the euro, angry that previous Greek governments lied to them about their level of deficit. That debt allowed Greece to bloat its federal payroll, with more than one in five Greeks employed by the government or a state-owned enterprise.

But that debt also allowed Greece to go on a shopping spree of European goods. Greeks built new highways and subways and natural gas buses, not to mention expensive military equipment -- largely imported from northern European companies and contractors.

Greece's mounting unpaid loans are owed, to a great degree, to European banks. If Greece doesn't make those payments, Europe's banks are in trouble. So Greece faces a choice -- balance its budget to free up cash to make debt payments, or refuse to pay and put Europe's financial system at risk.

Greece's government under Prime Minister George Papandreou, so far, has mostly done the right thing. Papandreou has owned up to Greece's past mistakes. More than that, the government has begun to cut wages, cut pensions and raise taxes. The newest measures -- approved in Parliament on Wednesday -- will start to sell off some publicly owned companies and land, and further raise taxes and cut spending.

Still, many outsiders -- and not a few insiders -- doubt that austerity will generate enough extra revenues to make debt payments well into the future.

Will Greece default on debt?

Without sustained growth, it is hard for most foreign financial analysts to see where the Greeks will come up with the cash to make payments on their debt.

Sustained growth will only happen when the government takes an ax to the knots of bureaucratic red tape that hamper even the simplest of business transactions. But the benefits of that kind of reform could take years to materialize.

Policymakers in Greece and throughout the European Union have yet to offer a near-term vision for how to jump-start the Greek economy. As a result, there is no real constituency for reform.

Greeks don't want cutbacks in public sector jobs if they can't see the private sector jobs that would replace them. They don't want to sell state-owned companies if it is not clear that privately held companies would be more successful. With so many Greeks on the public payroll, everyone in Greece either fears losing his job, or fears that his brother, or aunt, or neighbor or client will lose theirs.

In short, Greece's public is angry and scared. The Greeks are angry, because they've been lied to by their politicians, and scolded by European bureaucrats. They're scared, because the current slate of reforms will, in the short term, only make matters worse. Even small businesses -- which might be expected to support reform -- are convinced that their taxes will increase, that they will lose customers, and that they will continue to be strangled with regulation.

The public also knows that Europe fears a sovereign default. Many Greeks are willing to hold out on payments until Europe comes through with more loans or perhaps more stimulus.

What these Greeks don't realize is that the way they are holding Europe hostage is by threatening suicide.

They're scared, because the current slate of reforms will, in the short term, only make matters worse.
--William Antholis
RELATED TOPICS

To begin with, the biggest holders of Greek debt are Greek banks. If Greek banks fail, every Greek with a checking or savings account loses. Worse still, international faith in Greek businesses would be lost.

Many of the gains from economic integration over the last 25 years would be reversed, including the transformation of Greece from being nearly a Third World country to having a fully modern economy (albeit a quirky, over-regulated one).

If Greece exits the European Union, many young Greeks would lose the opportunity to travel freely in Europe to study or work and improve their standard of living. And European investment in Greece would halt.

The crisis will only end when policymakers throughout Europe recognize the nature of the challenge they face. Europe and Greece must find a way of making Greek debts sustainable while also generating prolonged economic growth throughout the EU. This will require shared sacrifice and a shared commitment to reform. When policymakers face the truth of the tragedy they are facing, everyone will finally put his guns down.

The opinions expressed in this commentary are solely those of William Antholis.