Why I'm raising my son to be a nerd 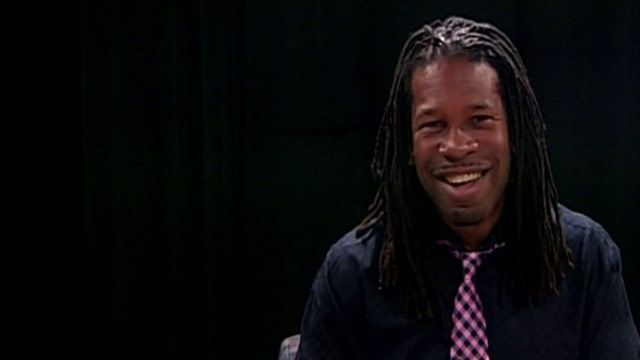 Editor's note: LZ Granderson writes a weekly column for CNN.com. A senior writer and columnist for ESPN The Magazine and ESPN.com, he has contributed to ESPN's "Sports Center," "Outside the Lines" and "First Take." He is a 2010 nominee and the 2009 winner of the Gay and Lesbian Alliance Against Defamation award for online journalism and a 2010 and 2008 honoree of the National Lesbian and Gay Journalists Association for column writing. Follow him on Twitter: @locs_n_laughs

Grand Rapids, Michigan (CNN) -- You know the kind of dad who registers his son for soccer almost as soon as he takes his first step?

You know that dad who yells so much on the sideline that he leaves the game a little hoarse?

Yeah, that was me too.

You know the dad who cheers when his kid brings home an A?

Well me neither ... until I became that dad a few years ago.

I used to beam with pride watching my son rack up the trophies as he bounced from soccer to hockey to tae kwon do. Over the past couple of years, track has been his focus, as he crushed several school records during citywide meets.

But one thing I've noticed over the years is that while everyone from his coaches to other parents and even family members are quick to point out his potential to earn a college scholarship, they do so with all of the emphasis on his athletic prowess.

No one -- and I mean, no one -- ever brings up his grades, a shame considering he has a 3.86 in an international baccalaureate program, studies Chinese, currently is in debate camp and has wanted to go to Stanford since the fifth grade.

Cornell's his back up plan.

In short, as good as he is in sports, I'm not raising him with the hopes of him being a jock. I'm raising him to be a nerd.

Are you a nerd or a geek?

And I couldn't be happier.

And by happier, I don't mean the lukewarm "well, at least he's not selling drugs" kind, but the same genuine thrill I used to reserve only for the trophy ceremony at the end of tournaments.

Jocks go on to play for your favorite team but nerds go on to own the teams for which those jocks play.

Jocks go on to play for your favorite team but nerds go on to own the teams those jocks play for.
--LZ Granderson

Granderson: Raise a nerd, not a jock
RELATED TOPICS

I know it's hard to find a job in this economy.

But I also know that at the beginning of the year, Google gave its employees a $1,000 bonus and a 10% raise because it kept losing its brightest employees to competitors, so somebody's hiring.

And it looks as if they're hiring nerds.

I was shocked during the GOP debate earlier this month that in two hours no candidate brought up education. They all talked about job creation and innovation but not education, as if they were not connected.

We know because of our culture's negative attitude toward nerds, our kids are discouraged from being bookish from an early age. We also know that there is a high drop out rate for college students in nerdy subjects such as science and math, which in turn affects how the country competes globally in fields such as medicine and engineering. So to me, there can be no innovation and job creation talks without talking about education.

At times, my son gets concerned that his bookish qualities may interfere with his social life. I just remind him that in the heart of hard economic times, 33 of 50 states increased the amount spent on prisons while decreasing dollars spent on K-12 and higher education. So while he's worrying about being cool, the job market is getting smaller and more competitive and our government is preparing to send more people to jail.

But again, it starts with me.

I finally figured out that if I wanted my son to really embrace education, I had to take the lead. Not by downplaying his accomplishments on the field but by elevating the importance of his work in the classroom. So I smile in the doorway when I walk into a room to see him reading for fun the same way I smile when I look out into the backyard to see him working on his dribbling.

It sounds a bit odd, I will admit, but if exuberant positive reinforcement is acceptable for tossing a ball in a hoop, why is it out of place to be just as excited for our kids getting good grades?

Being good students. Being, dare I say, a nerd?

American kids my son's age rank 14th in reading, 17th in science and 25th in math and it's not because of bad teachers and a broken public school system.

OK, it's not just because of those things.

We also don't believe in the value of education, culturally -- we just like to say we do because as citizens of an industrialized nation, we're supposed to. But we can tell our children that school is important until we're blue in the face, they're not stupid.

They see the loudest applause is for the kids on the field. They know teachers are paid poorly and don't drive fancy cars. They know people plan Super Bowl parties but mock the National Spelling Bee.

In other words, they see the hypocrisy, and we can't expect society to correct itself.