War powers belong to Congress and the president 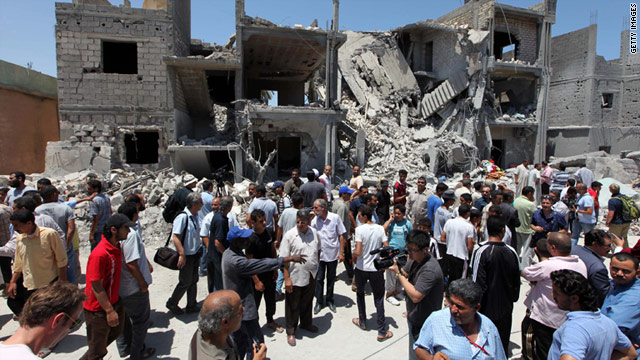 On a government led tour, journalists and residents survey buildings in Tripoli that Libyan officials said were hit by NATO airstrikes.
STORY HIGHLIGHTS

Still, tension over military action can develop between the White House and Congress. In the most recent chapter of the nation's inter-branch conflict, Speaker of the House John Boehner has charged that President Barack Obama violated the War Powers Resolution, which Congress passed in 1973 in an effort to seize war power back from the executive branch.

Obama is being criticized because he did not request congressional approval of the military operations in Libya even though they have lasted for more than 90 days. In a symbolic vote, 225 Republicans allied with 70 Democrats to vote down a measure authorizing the operations in Libya. They did not vote to cut funding, however.

While the speaker has raised an important point, the fact is that all presidents, Democrats and Republicans, have made decisions about sending troops into conflict without a declaration of war. Since President Harry Truman sent troops into Korea in 1950, legislators have let presidents make the initial decision as to whether military force should be used.

Although Congress has remained quite active in wartime politics, ranging from its use of hearings to stimulate political debate to the shaping of military budgets, Congress no longer declares war. Before the Korean War, the situation was quite different.

As Louis Fischer of the Congressional Research Service wrote, "From 1789 to 1950, lawmakers, the courts, and the executive branch understood that only Congress could initiate offensive actions against other nations."

There are many reasons for why presidents usurped so much power. In most areas of government, the legislative branch of government lost some of its power in the 20th century. As government expanded, and as the U.S. gained more of a stake in other parts of the world and with the advent of nuclear weapons, there was a need for quicker decision-making. A greater number of politicians in both parties supported the centralization of power in the White House.

Very often Congress was also eager to avoid having to decide whether to declare war so it could force presidents to shoulder the blame when things went wrong. At other times, the party in control of Congress agreed with the president's military agenda so that legislators were happy to delegate their authority, as was the case in 1950 (Korea) and Iraq (2003).

But the failure of Congress to fully participate in the initial decision to use military force has enormous costs for the nation beyond the obvious constitutional questions that have been raised.

The first problem is that the U.S. now tends to go to war without having a substantive debate about the human and financial costs that the operation could entail. Asking for a declaration of war, and thus making Congress take responsibility for the decision, had required presidents to enter into a heated debate about the rationale behind the mission, the potential for large-scale casualties and how much money would be spent.

When presidents send troops into conflict without asking Congress for approval, it has been much easier for presidents to elude these realities. President Lyndon Johnson famously increased the troop levels in Vietnam without the public fully realizing what was happening until after it was too late.

Although Johnson promised Democrats when they debated the Gulf of Tonkin Resolution in 1964 that they would only have a limited deployment and he would ask them again if the mission increased, he never did. He used the broad authority granted to him to vastly expand the operations during his presidency.

By the end of his time in office, hundreds of thousands of troops were fighting a hopeless war in the jungles of Vietnam. Johnson also continued to mask the budgetary cost, realizing the opposition that would emerge if legislators knew how much the nation would spend. When the costs became clear, Johnson was forced to request a tax increase from Congress in 1967, a request which greatly undermined his support.

The second cost of presidents going to war rather than Congress doing so is that major mistakes result when decisions are made so quickly. When there is not an immediate national security risk involved, the slowness of the legislative process does offer an opportunity to force policymakers to prove their case before going to war.

Speed is not always a virtue. In the case of Iraq, the president started the war based on the shoddiest of evidence about WMD. The result was an embarrassment for the nation, an operation that undermined U.S. credibility abroad.

Even in military actions that have stronger justifications, there are downsides to speed. With President Obama and the surge in Afghanistan, there is considerable evidence that the administration went in without a clear strategy and without a clear objective. With Libya, there are major concerns about what the administration hopes to accomplish and whether we are supporting rebel forces that might be connected with terrorist networks intent on harming the U.S.

The third cost has been the cheapening of the decision about using military force. In the end, the decision about whether to send human treasure and expend valuable dollars abroad should be one that is made by both branches of government and one that results from a national dialogue. Requiring Congress to declare war forces voters to think about the decision sooner rather than later.

While efficiency is essential, so too is the democratic process upon which our nation is built.

The result of the decision-making process that has been used in recent decades is that as a nation too many citizens lose their connection to the war. Indeed, most Americans don't even think twice when troops are sent abroad. The shift of power toward the president has compounded the effects of not having a draft, which Congress dismantled in 1973. Wars sometimes resemble just another administrative decision made by the White House rather than a democratic decision.

So Boehner has raised a fair point, though he and other Republicans don't have much ground to stand on given their own party's history. Republicans, like Democrats, have generally supported presidential-war power in addition to a weak Congress.

Most politicians have only worried about war power when it is politically convenient. Indeed, in 2007, then-Sen. Obama wrote, the "President does not have power under the Constitution to unilaterally authorize a military attack in a situation that does not involve stopping an actual or imminent threat to this nation."

Clearly, Obama has not governed by the principles on which he campaigned.

It is doubtful whether the parties will do anything about this. The War Powers Resolution has not worked well and there seems to be little appetite to pass something else. But the consequences of the path that the nation has chosen are enormously high.

We've moved too far away from the era when Congress matters. As a result, the decision to use troops is too easy and often made in haste. Obama, who spoke about this issue so cogently on the campaign trail, should be a president who understands that reality.