How one 'cookie' got U.S. trapped in Middle East

By David A. Lake, Special to CNN 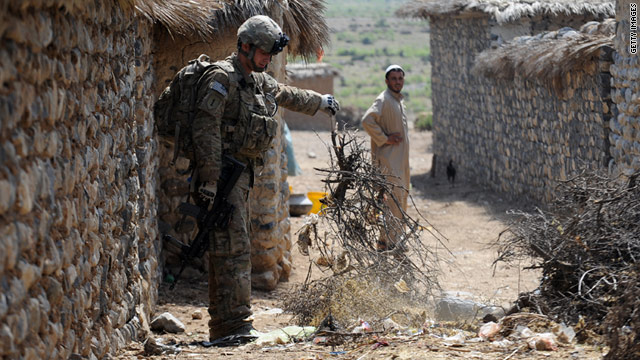 A US soldier searches for arms and ammunitions in an alley while a villager looks on in Afghanistan's Khost province.
STORY HIGHLIGHTS

Editor's note: David A. Lake is the Gerri-Ann and Gary E. Jacobs Professor of Social Sciences and Distinguished Professor of Political Science at the University of California, San Diego. He is the author of "Hierarchy in International Relations" and "Entangling Relations: American Foreign Policy in its Century."

(CNN) -- One of my favorite children's books is "If You Give a Mouse a Cookie." Laura Numeroff's entertaining tale recounts the series of requests and events that follow from giving an adorable little rodent a treat. This first act of kindness leads to a request for a glass of milk, then a straw, a napkin, and mirror to inspect his milk mustache, and so on, until -- guess what? -- the mouse wants another cookie.

This chain of never-ending demands and unforeseen consequences is an apt description of U.S. policy towards the Middle East.

The United States has long wanted the "cookie" of a base of operations in the Middle East. After World War II, the United States built a globe-spanning network of military bases from which to project power to deter the Soviet Union and, equally, to intervene in regional conflicts. This produced massive military bases in Western Europe, extended into Eastern Europe after 1989, and similar outposts in the Pacific, including Japan, the Philippines, and various U.S. possessions.

The principal gap in this world-wide network was the Middle East. Seeking to fill this hole has been a primary goal of American policy for decades. Such a physical presence in the region would allow Washington to stabilize the region, protect friends and allied countries, prop up pro-American regimes, and preserve the flow of oil.

This quest for bases in the Middle East leads, first, to our unshakeable commitment to Israel, a fiercely independent state that would never permit actual deployments of U.S. forces on its territory but with whom we have deep security cooperation and understandings that can be activated in crises. This deep tie, in turn, alienates potential Arab allies in the rest of the region.

Deadly clashes in Syria
Projecting power into the region in the vain hope of successfully policing the area may simply be a 'bridge too far.'
--David A. Lake
RELATED TOPICS

We have long maintained a similar if more discreet relationship with Saudi Arabia, propping up the house of Saud and building bases to American military specifications for use in case of regional emergency.

Beginning in the so-called Nixon Doctrine of 1969, the United States built a special relationship with the Shah of Iran, who promised to act as our regional surrogate. Our support for the Shah contributed to the Iranian revolution in 1979, and certainly to its vehemently anti-American direction.

Containing Iran led us to support Iraq during the war between those two countries in the 1980s. Our support of Saddam Hussein during that conflict, in turn, along with ambiguous signals from Washington, led him to believe he could invade Kuwait with relative impunity.

Our decision to defend the sovereignty of Kuwait necessitated activating our alliance with Saudi Arabia and the deployment of nearly 600,000 troops on its soil. This Western presence on sacred Muslim territory caused al Qaeda to redirect its energies from overthrowing its "near enemy," the apostate regimes within the Persian Gulf, to attacking the "far enemy" of the United States.

Countering this threat, of course, led directly to the war in Afghanistan and indirectly to the war against Iraq in 2003, as well as the redeployment of U.S. forces from Saudi Arabia to other Gulf states, including Qatar, Bahrain, and others where we are now supporting the ruling monarchs in the face of increasing public dissent.

Fighting in Afghanistan required that we maintain good relations with Pakistan, which played both sides in the conflict by accepting massive U.S. military aid and acquiescing in -- if not actively supporting -- al Qaeda and Taliban forces in its ungovernable Northwest territories.

President Barack Obama last week announced the beginning of the end of the war in Afghanistan. After surging 30,000 additional troops in 2009, he has announced a timetable for withdrawing substantial ground forces, returning our deployment there to pre-surge levels within 14 months and reducing it substantially by the end of 2014. This is faster than the military desires.

An important consideration in the military's thinking is that bases in Afghanistan are now necessary to deal with instability in nuclear-armed Pakistan and possible terrorism emanating from within its borders. As Bruce Riedel, a former CIA officer who conducted Obama's first review of strategy in the region, said to the New York Times, "What the Abbottabad raid [that killed Osama bin Laden] demonstrated more vividly than ever is that we need a base to strike targets in Pakistan, and the geography is simple: You need to do that from Afghanistan."

A primary rationale for continuing the U.S. presence in Afghanistan, we are now told, is to use that country as a platform to police its neighbor, who we used to consider an ally in the war on terror but which has now arguably become a substantial threat to the United States.

Where does this end? We are well past the first, perhaps innocuous cookie and far into the realm of unanticipated consequences. How many other principles must we compromise and how many other countries must we invade in order to secure a presence in the Middle East that would then allow us to "stabilize" the region?

It is time to reconsider the foundations of our Middle East strategy. Projecting power into the region in the vain hope of successfully policing the area may simply be a "bridge too far." Although security of the oil supply is a concern, we should remember that it is as much in the interests of the Persian Gulf states, whoever may rule them, to sell us their oil as it is in our interests to buy it. Prices for oil are set by global demand and supply, not just by the political machinations of this or that regime within the Gulf.

It's time to ask: Why are we in the Middle East? Are bases within the region worth the cost? Our desire for a cookie has led to consequences that we never anticipated. And now we -- or some of us -- are asking for another cookie. Perhaps it's time to say "enough."

The opinions expressed in this commentary are solely those of David A. Lake.