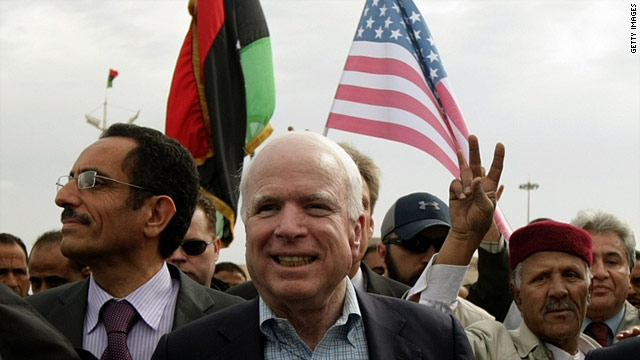 Editor's note: Nicolaus Mills is professor of American Studies at Sarah Lawrence College and author of "Winning the Peace: The Marshall Plan and America's Coming of Age as a Superpower."

New York (CNN) -- The decisions of Republican senators John McCain of Arizona and Lindsey Graham of South Carolina to support President Obama's sending of military aid to America's NATO allies in their air war against Libya's dictator Moammar Gadhafi are acts of political courage in a time of intense partisanship.

In speaking out, the two senators have put themselves at odds with their party's presidential contenders, a number of whom voiced strong criticism of Obama's Libya policy at last week's New Hampshire primary debate.

But in challenging the growing isolationism in today's Republican Party, McCain and Graham have also borrowed a page from history. Their actions harkens back to the choice a small group of key Republicans made in the early 1940s, when they supported America's first peace-time draft.

After two terms in office, President Franklin Roosevelt faced widespread Republican opposition in Congress, and when in the election year of 1940, he put aside his caution and came out in favor of the draft, he challenged not only Republicans but also labor leaders John L. Lewis and William Green.

Army Chief of Staff George Marshall and Secretary of War Henry Stimson did everything they could to help secure passage of the 1940 draft, but opposition to the proposed law did not lose its momentum until Republican presidential nominee Wendell Willkie took the Roosevelt administration's side, declaring selective service "is the only democratic way in which to assure the trained and competent manpower we need in our national defense."

A year later, despite the military gains of Germany and Japan, Republican opposition to the draft was more intense than it had been in 1940. Within the Army, the OHIO Movement (an acronym for Over the Hill in October, the month the 1940 draft elapsed) received enormous publicity, and Republicans thought they had a chance to deal Democrats a major setback by opposing the draft.

As he later wrote in his memoir, "My First Fifty Years in Politics", House Republican Minority Leader Joseph Martin believed a vote against draft extension might "funnel the winds into our sails and blow us back again to the commanding position the Republican Party had enjoyed in the 1920s."

This time the chief Republican who came to the Roosevelt administration's aid was upstate New York congressman James W. Wadsworth, a co-sponsor of the Burke-Wadsworth bill that had made the 1940 draft possible. Wadsworth arranged for 40 key Republicans to meet at the Army and Navy Club in Washington to hear George Marshall make the military's case for renewing the draft.

The meeting was a turning point in winning desperately-needed Republican support for renewal of the draft. The 1941 draft extension became law in August, overcoming intense opposition in the House of Representative, where 21 Republicans joined 182 Democrats to pass the bill by one vote, 203 to 202.

The handful of Republicans who had voted with the Democrats had taken a risk they would never have to pay for at the polls. Four months later, when the United States was hit by a surprise Japanese attack at Pearl Harbor, they could rightfully claim the country was better able to defend itself because they had refused to play partisan politics.

Seventy years later, America is not in the dire straits it faced during the summer of 1941, and President Obama's actions in Libya are complicated by the question of whether he is violating the Vietnam-era War Powers Act of 1973 by not getting congressional approval for any future military steps he takes.

Still it is unlikely that, with an election coming up, John McCain and Lindsey Graham will win thanks from their party for supporting the president. Most Republicans appear set on thwarting Obama, whom they see as weak and vulnerable, every chance they get.

If history is any guide, McCain and Graham can look forward to being vindicated, as Willkie and Wadsworth were.

While the president has not yet made the case for aiding Libya as strongly as it needs to be argued, Senator McCain in particular has. Responding to Minnesota Republican congresswoman Michele Bachmann's assertion that America has "no vital national interest" in Libya, McCain has made it clear that his differences with her are fundamental.

"The fact is our interests are our values," McCain declared last Sunday in a television interview. "We don't want people needlessly slaughtered by the thousands if we can prevent such activity," he announced, speaking directly to Bachmann but, even more importantly, to Libyan dictator Gadhafi's genocidal promise to show "no mercy" to his country's rebels.