By Aaron Carroll, Special to CNN

Editor's note: Dr. Aaron E. Carroll is an associate professor of pediatrics at the Indiana University School of Medicine and the director of the university's Center for Health Policy and Professionalism Research. He blogs about health policy at The Incidental Economist.

(CNN) -- Should we control the spiraling cost of Medicare by raising its eligibility age from 65 to 67 or more? Many have argued that we should, because, they say, life expectancy today is much higher than when Medicare was created. The program was never designed to last so many years per person, and so, perhaps, people should retire later.

The Congressional Budget Office has estimated that raising the eligibility age of Medicare to 67 would save about $125 billion through 2021 alone. That sounds like a great deal. However, the CBO doesn't say that health care costs will go down overall, or that this money won't have to be spent by others. It will.

Those savings to the federal government are achieved mostly through cost shifting. It's entirely possible that we might "save" that $125 billion only by shifting the cost onto the elderly, employers and others in the exchange risk pools. The Kaiser Family Foundation estimates that seniors age 65-67 would have to pay an additional $5.6 billion in out-of pocket costs -- in 2014 alone

Let's say you think this is OK, however. Perhaps you believe that, up until Medicare kicks in, you should be responsible for your health care costs. The question then becomes, is it reasonable to ask seniors to wait longer for Medicare because people are living so much longer?

Yes, life expectancy is going up. But not nearly as fast for those on Medicare as people think. An additional problem is that it's not going up equally. A new study just released by the Institute for Health Metrics and Evaluation looks at changes in life expectancy from 1987-2007 by county. Here's the most troubling part of it (emphasis mine):

Change in life expectancy is so uneven that within some states there is now a decade difference between the counties with the longest lives and those with the shortest. States such as Arizona, Florida, Virginia and Georgia have seen counties leap forward more than five years from 1987 to 2007 while nearby counties stagnate or even lose years of life expectancy. 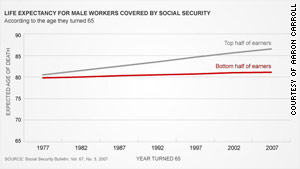 It shouldn't come as a surprise it may be that poorer people are not making nearly the gains in life expectancy that wealthier people are. If you look at the maps from those studies, this seems to be true. And it's born out by another study that appeared in Social Security Bulletin in 2007. This is a chart I made from data in that paper (Table 4):

This is what you should think about whenever someone talks about increasing the eligibility age for Medicare or Social Security. Not everyone's life expectancy is increasing. Those who need the benefits the most would be the ones who stand to lose the biggest percentage of them by raising the eligibility age. Asking them to pay more out-of pocket doesn't seem like a fair, nor workable, solution.